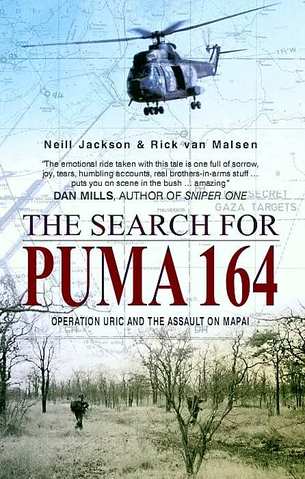 The Search for Puma 164, Operation Uric and the Assault on Mapai

This product was added to our database on Tuesday 15 November 2011.

Product description
September 6, 1979. Into the deepening darkness of the African night, a lone Aerospatiale Puma helicopter flies resolutely northward, leaving behind the desolation of the battle for Mapai, in MozambiqueÆs Gaza Province. Huddled in the cabin, two weary soldiers sit silently immersed in their own thoughts, contemplating their difficult duties ahead. The taller of the two, WOII Graham Enslin, CSM, Support Commando, Rhodesian Light Infantry (RLI), is struggling to come to terms with the death in action that morning of his younger brother Brian. He wonders how to break the news to his parents. The other, Lt Rick van Malsen BCR, 2IC, 1 Commando, 1RLI, works through the list of names in his hand, names of the 16 men who perished with Trooper Brian Enslin when a South African Air Force Puma was shot out of the sky during the assault on the Frelimo and ZANLA stronghold at Mapai on the much-feared, so-called æRussian FrontÆ. It will be his job to send out the official death notices and to advise the next of kin that the bodies of the three South African airmen and 14 Rhodesian soldiers were not recovered. Both men vow that night, each for reasons of his own, to one day return to the scene of the crash to pay proper tribute to the fallen men: the aircrew and troops of Puma 164.

April 11, 2009. And so it was, almost 30 years later, that Rick van Malsen returns to the scene of that horrendous battle, to search for the crash site of the downed Puma, in an effort to achieve closure for the relatives of the dead. This is a story of courage and devotion to duty but, above all, it is a story of comradeship and loyalty undimmed by the passage of time, of a band of brothers bonded together in war, united still in peace