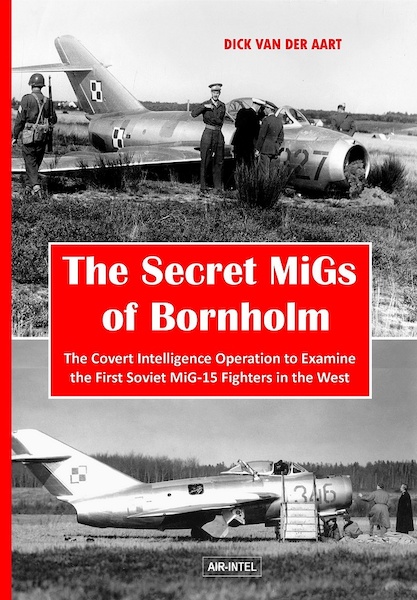 The Secret MiGs of Bornholm: The Covert Intelligence Operation to examine the First Soviet MiG-15 Fighters in the West

This product was added to our database on Wednesday 3 November 2021.

A GREAT STORY OF AIR INTELLIGENCE IN THE COLD WAR
Based on extensive research and many declassified Secret and Top Secret documents, The Secret MiGs of Bornholm tells in fascinating detail the amazing story of one of the most successful military intelligence operations of the Cold War. In the fifties three Polish Air Force pilots escaped with their Soviet MiG-15 jet fighters to the Danish island of Bornholm. Their daring freedom flights enabled Western military intelligence organizations to uncover the secrets of the most advanced Soviet jet fighter of the time. Denmark was put under extreme political pressure by the US and Great Britain to hold the Polish MiGs long enough to allow the examination of the jets by foreign intelligence experts.
On 5 March 1953, the very day Soviet dictator Stalin died, a young Polish Air Force pilot defected with a brand-new Soviet MiG-15 jet fighter to the small Danish island of Bornholm in the Baltic. It was the first MiG-15 in the hands of the West. The incident offered an unique and long-sought opportunity for a detailed study of the much-feared Soviet combat aircraft. Denmark, fearing a raid on Bornholm by Polish or Russian special forces to recapture the MiG, wanted to ship the precious jet back to Poland as soon as possible. But its NATO Allies - especially the United States and Great Britain - demanded a full-scale examination of the MiG and pressed Copenhagen to keep the Polish fighter or at least delay its return.
In a tense political give-and-take the Danish government reluctantly accepted the help of foreign experts, but insisted that the intelligence exploitation was kept secret for the rest of the world. To the dismay of Denmark, the first MiG-15 to Bornholm was followed by two others from Poland. All these MiGs were covertly examined by foreign experts. But London and Washington wanted more. Denmark was repeatedly asked by American and British intelligence organizations to allow test flights
with the MiGs and behind closed doors even de possibility of 'stealing' one of the MiG-15s was raised. The US Air Force in Europe proposed to give Copenhagen money to replace the short grass strip on Bornholm with a long concrete runway. The Americans saw the island, so close to the Iron Curtain, as an ideal location to lure communist military aircraft to the West. But they were disappointed. No more East European pilots fled to Bornholm.
A fourth Polish pilot did escape with his MiG-15 to Sweden. Other Soviet MiG fighters crashed in Finland and Yugoslavia. All became targets for secret intelligence operations - as disclosed in this book.

About the Author
DICK VAN DER AART (1946) is a Dutch journalist, writer and airhistorian. He was Foreign Editor and Senior Editor with NOS Television News and NOS Current Affairs and contributed from 1970 to 1992 as defence and intelligence correspondent to the national daily NRC Handelsblad. He wrote many articles about military aviation and air intelligence in the Cold War for Dutch aviation and defence publications. His first book, Aerial Espionage - Secret Intelligence Flights by East and West, was published in the Netherlands, Great-Britain, the United States and Japan. In 2009 he wrote MiG's op de Vlucht (MiGs on the Run) - the secret history of pilot defectors in the Cold War. He is a member of the Netherlands Intelligence Studies Association NISA.

The Messerschmitt Me 163 Komet

The Messerschmitt Me 410 in Norway