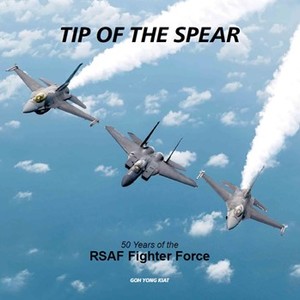 Tip of the spear, 50 years of the RSAF Fighter Force (Republic of Singapore Air Force)

This product was added to our database on Thursday 9 June 2022.

How about that upgraded Hunter F.74S with "enhanced weapons carrying capability"?

Steel yourself for surprises, too.

Like that 1970 McDonnell Douglas proposal for a single-seat RSAF F-4E Phantom II derivative. Or a Gloster Javelin FAW.9 in early RSAF livery. Or that Hawker Hunter in three-color, "air defense" raiment.

Nor is coverage confined to the RSAF alone. Remarks log, for instance, examples of British, Australian, New Zealand, American, Russian, and French military aircraft in Singapore skies. And text recounts RSAF deployments and visits to other countries, as well.

Please note: price is now settled, the books are on their way and we've opened the pre-order facility. It will be a single shipment as the prices are so high it prevents a reorder.

Evolution of the Snowbirds, Commemorating the 5oth Anniversary of the Canadian Forces Snowbirds, 431 Air Demonstration Squadron