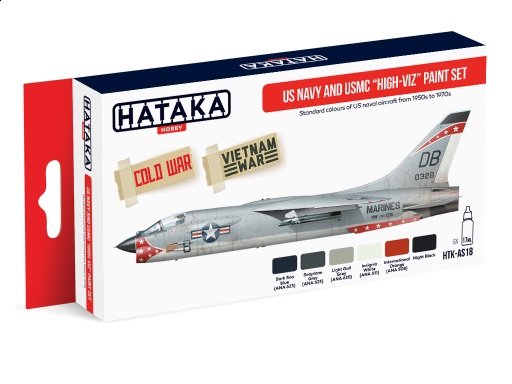 The newest Hataka Hobby paint set offers a full line of colours necessary for painting of all US Navy and US Marines carrier-based planes from late WW2 to 1970s. It obviously includes Dark Sea Blue paint (used from late 1944 until 1955 on all US carrier-based aircraft) and Light Gull Grey accompanied by Insignia White (used after 1955 till late 1970s on all carrier-based US Navy and USMC attack planes).
Additionally, apart from Nigh Black paint (used for various application on all naval aircraft), the set contains two must haves for all naval aviation fans – Seaplane Grey (used for seaplanes, land-based patrol planes, but also naval helicopters) and International Orange (used for high-viz marking of naval training and SAR aircraft).