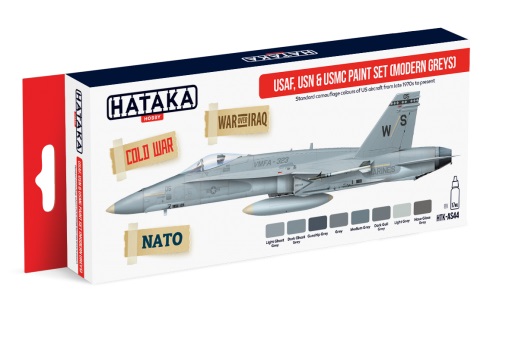 In late 1970s US air forces started to introduce new standard of aircraft camouflage (often referred to as "Tactical Paint Scheme") formed from different shades of grey. In USAF it appeared first on F-15s and F-16s (and F-4s as Hill One camo), and on A-10s but only after Operation Desert Storm. Harriers of USMC adopted TPS (first in three, later in two-colour version) also only after ODS proved previous camo not effective in desert conditions. Rest of naval aircraft (USN and USMC) wore TPS from 1980 (A-4s and F/A-18s) and 1981 (remaining types). Introduction of F-35s (and new Have Glass 5 coat on F-16s) brought new colour FS36170 into line.

HTK-AS44 includes colours for all above mentioned planes.