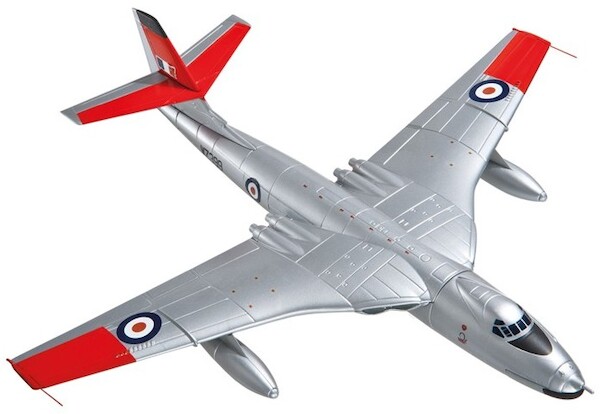 This product was added to our database on Friday 24 April 2015.

Delivered to 543 Squadron in October 1956, WZ399 had a short life with the squadron. Deployed on exercise 'Snowdrop' in January of 1957, it was then that the aircraft received its distinctive red tail and wingtip markings, applied for operating over the Arctic Circle.

The Valiants were based at Offutt Air Force Base, Nebraska, where, in November 1961, the aircraft suffered technical problems during take-off. The take-off was aborted and the aircraft overshot the end of the runway, went down a steep slope and crossed a road only coming to a halt when it hit a railway embankment. The aircraft was totally destroyed by fire, the crew only surviving because the forward fuselage was separated from the rest of the wreckage.

WZ399 was a PR variant of the Valiant, fitted with a number of powerful cameras in its bomb bay giving it a useful photo reconnaissance capability. However, the advent of powerful surface to air missiles made this role more and more hazardous, eventually causing the Valiant to be phased out in favour of the higher flying Canberra.