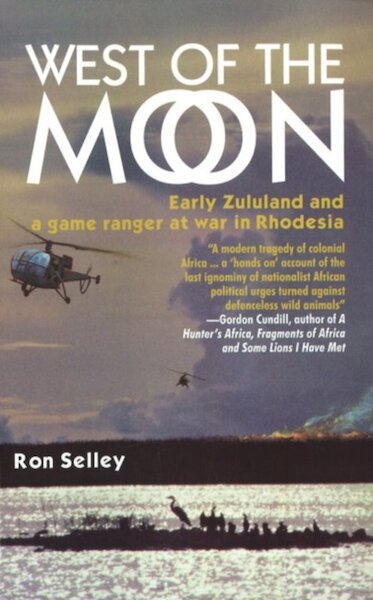 This product was added to our database on Sunday 9 february 2020.

West of the Moon evokes a bygone era of the 1940s' colonial Natal through to the cruel intensity of the Bush War' that ravaged Rhodesia in the 1970s.

The book is in two distinct parts; Part 1 chronicles the author's earlier years, an idyllic childhood spent roaming and hunting among the empty, rolling hills of northern Zululand; of the inaccessible St Lucia waterway; the nostalgia of yellow fever trees; of building railway bridges into the wild interior; of colonial scallywags and native witchcraft; of shipwrecks; and the sweaty cantinas and backstreets of Lourenco Marques. Part 2 recounts the author's move across the Limpopo where his love of adventure, hunting and the bushveld lead him to Rhodesia where he became a game ranger, dealing with problem animals in the farming areas and the escalating terrorist war in the Gona re Zhou National Park in the beleaguered south-eastern Lowveld of the country. Trying to care for an environment and the animals that depend upon it, while the people around commit barbaric acts in the name of political ideology, brutally awakens the author to the reality of the disintegration of an organised colonial subcontinent.

About the Author:  Ron Selley was born in1947 and grew up in northern Zululand, South Africa. In the wilds of northern Natal, he started hunting at the age of eight and operated a boat on Lake St Lucia, his home turf', at the age of ten, becoming fluent in Zulu, Afrikaans and French. After school he did his national service with the South African Kommandos, before working on various farms and sugar estates. Today, he enjoys black-powder hunting, is an avid collector of World War II trucks and tanks, owns two Rolls Royces, and is the Station Commander of National Sea Rescue Station 24A.