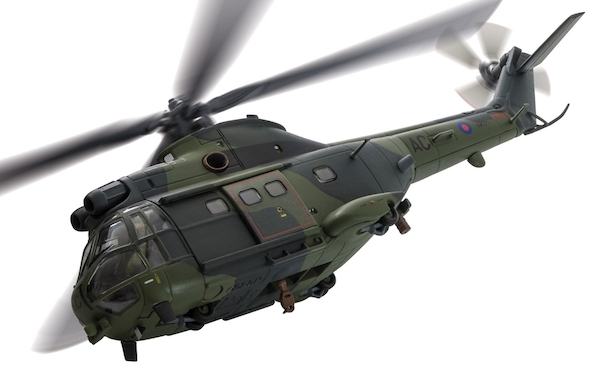 This product was added to our database on Wednesday 21 March 2018.

Westland Puma HC.1 XW220/AC, RAF No.72 Squadron, Aldergrove, Northern Ireland, 1997
As one of the world's most successful modern battle?eld helicopters, the Westland Puma HC.1 entered service with the Royal Air Force in 1971 and represented a huge technological advance over the Belvedere and Whirlwind aircraft it replaced. An incredibly ?exible aviation asset, the Puma is tasked with the tactical movement of troops, weapons, ammunition and general support supplies and is capable of operating in all weather conditions, by day or night. With room to carry 16 fully equipped troops, or up to two tonnes of freight either internally, or slung from a hard point under the aircraft's fuselage, the Puma can also operate in search and rescue and casualty evacuation roles, making this one of the most useful and ?exible aircraft in the RAF. This ?exibility has seen the Puma required to operate in areas of con?ict all over the world, most noticeably during both Gulf Wars, where the aircraft continued to build on its excellent reputation. With the original RAF Pumas serving for over forty years, an upgrade programme will see this superb machine remain in service for many years to come.