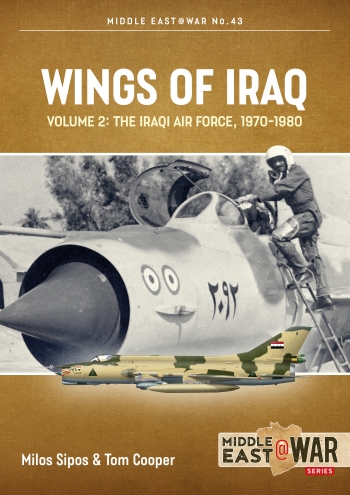 This product was added to our database on Friday 11 March 2022.

Officially established on 22 April 1931, around a core of 5 pilots and 32 aircraft mechanics, the Royal Iraqi Air Force was the first military flying service in any Arab country.

Wings of Iraq, Volume 2 tells the story of the Iraqi Air Force between 1970 and 1980. In doing so it examines the air force's involvement in the October 1973 Arab-Israeli War, and then the showdown with the Iranian-supported Kurdish insurgency in northern Iraq in 1974-1975. These two affairs taught the Iraqis that numbers alone did not make an air force. Correspondingly, during the second half of the 1970s, Baghdad embarked on a project based on full technology transfer from France, which was intended to result in preparing the IrAF for the twenty-first century.

This process hardly began when the new ruler in Baghdad, Saddam Hussein at-Tikriti, led his country into an invasion of neighbouring Iran, embroiling it in a ruinous, eight-year-long war. This volume details the events leading up to the beginning of that war and its opening moves in the air.

Although virtually 'born in battle', collecting precious combat experience and playing an important role in so many internal and external conflicts, the Iraqi Air Force remains one of the least known and most misinterpreted military services in the Middle East. Richly illustrated, Wings of Iraq, Volume 2, provides a uniquely compact yet comprehensive guide to its operational history, its crucial officers and aircraft, and its major operations between 1970 and 1980.