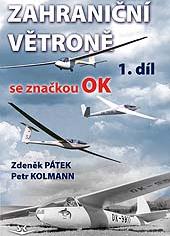 This product was added to our database on Friday 20 September 2019.

The two-part book provides an overview of all foreign types of gliders, gliders and motor gliders that have worn the OK brand since 1945. Short history of gliders development with technical descriptions, technical data and drawings is complemented by a brief history of their operation in our country and accompanied by often unique images. The first part, in addition to the general introduction and explanation of individual terms, provides descriptions of gliders made abroad, with the exception of Germany. Germany has been a world sailing superpower since the early 1920s, and it still maintains this position. It is therefore not surprising that gliders of German construction are widely distributed throughout the world. German glider designs had a significant impact on our pre-war sailing, and booty in the form of German gliders and gliders had become the basis of Czechoslovak gliding since the summer of 1945, until the domestic aviation industry supplied our aeroclubs with sufficient gliding technology. In the period after 1989, the range of non-powered aircraft changed and significantly expanded mainly to German types, some of which were produced under license in our country. Due to the importance and number of German OK-type aircraft, the authors decided to devote a separate second volume to this book, in which over sixty basic types will be introduced.