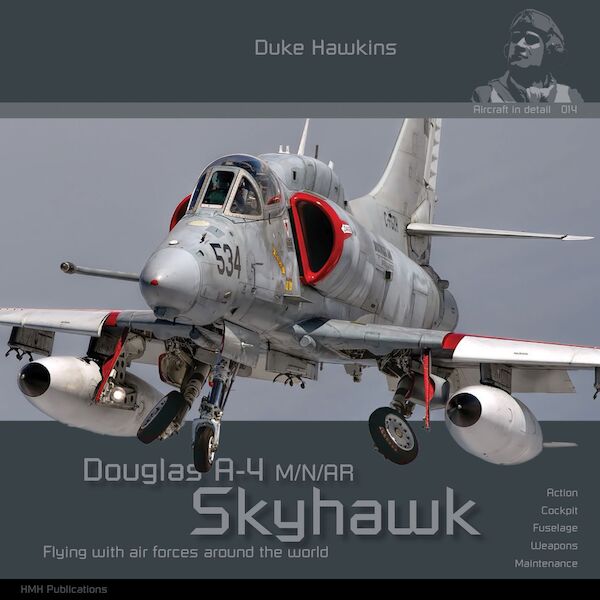 Share this product
Also in this series:
014HMH PublicationsBooks on aviation / US Jet Aircraft
Product description

The A-4 Skyhawk is another example of a highly successful and very compact fighter jet and in book 14 of the series, we bring you a close-up of this impressive and very manoevrable aircraft. This book includes spectacular air-to-air photography, as well as action from jets flying with Top Aces in Germany and the air forces of Israel, Argentina and Brazil. On 6 pages, we even show the Skyhawk - or Scooter as it is nicknamed - in action aboard the Săo Paulo aircraft carrier of the Brazilian Navy

There isn't a detail that is overlooked in this book: the forward fuselage, landing gear, vertical tail, wings, air intakes, jet exhaust, ... And of course, the cockpit isn't forgotten! The book also contains an extensive chapter covering the maintaince of the A-4 Skyhawk: no less than 24 pages cover every aspect of the jet, showing the interior of the fuselage, the engine, open access panels, avionics and even the folding nose of the Skyhawk. This book also offers you close-ups of the slats, trailing edge flaps, speed brakes and horizontal tails. 116 pages for the aircraft enthusiast and the scale aircraft modeller, filled with nearly 300 photographs!