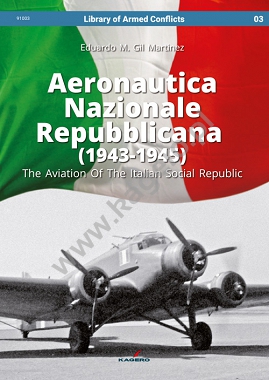 Aeronautica Nazionale Repubblicana (1943-1945). The Aviation Of The Italian Social Republic (Kagero 9788365437709)
€ 16.47
EU: incl. tax € 17.95
Reduced shipping charge may be applicable depending on country of destination and contents of shopping cart. Will be shown before checkout.Add to cart

This product was added to our database on Thursday 17 May 2018.

Continuing with the study of the lesser known Air Forces that fought in the skies of Europe during World War II, in this book we want to remember the Italian Air Force that after the Armistice in 1943 remained under the command of Benito Mussolini and allied to Germany better than join to the Western Allies: the Aeronautica Nazionale Repubblicana (ANR). At the same time two differents Italian Air Forces fought in the Mediterranean Theatre of Operations, although they didn´t fought each other. Fortunately several works above all from Italian authors rescued the ANR from the oblivion, although there are few works from no Italian authors too. The works written for D´Amico, Valentini, Di Terlizzi, Garello, Arena, Neulen, Beale, Gentili, etc ... had lightened us with a good knowlegde about the matter. In this work we have try to create a text that allow to all readers to understand and know the most important facts in the history of all branches of the ANR (without forget that the ANR was not only formed by planes but ground forces as parachutist too) since it was created to the end of World War II. For this, it has been necessary look for information in different sources, from the mains to the minors, to try to complete the research and offer it in the most definite way but don´t trying to be exhaustive but as educational as possible. Finally as is required we use this work to pay tribute to all the members of the Aeronautica Nazionale Repubblicana that fought in World War, defending the skies and grounds of their country.
about 89 photos
about 11 color profiles