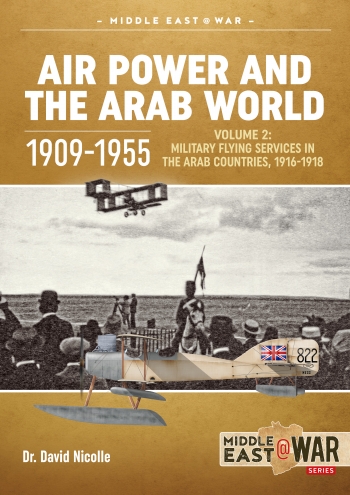 At a time when multiple wars are raging across much of the Middle East, it is almost forgotten that it was Abu al-Qasim Abbas ibn Firnas ibn Wirdas at-Takurni – an Andalusian inventor, physician and engineer – who was the first person to undertake experiments in flying with any degree of success. That was back in the 9th Century A.D. Nigh on a thousand years later the Arab World's critical strategic location made it almost inevitable that these regions would be drawn into the imperial rivalries of the leading European powers, while the Ottoman Empire struggled to maintain its existing position in the area. This in turn meant that the first bombs to be dropped by military aircraft fell on Arab soil. Not surprisingly, as the Arab countries slowly achieved their independence, they too wanted to have air forces. In 1948 the first such Arab air forces were thrown into battle in an ill-fated attempt to keep Palestine as a primarily Arab country.

Based on decades of consistent research, but also newly available sources in both Arabic and various European languages, and richly illustrated with a wide range of authentic photography, Volume 2 of the 'Air Power and the Arab World, 1909-1955' mini-series continues the story of the men and machines of the first half century of military aviation in the Arab World.