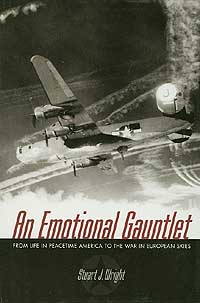 This product was added to our database on Tuesday 2 May 2006.

Stuart J Wright tells the gripping story of a World War II American aircrew flying missions from Old Buckenham, England in a B-24 Liberator bomber they nicknamed Corky. This is a true account based on years of research and correspondence with crew members and their families. Wright adds a dimension rarely explored in other World War II memoirs and narratives, beginning the chronicle during peacetime when the men of the aircrew are introduced as civilians - kids during the 1920s. As they mature through the years of the Great Depression to face a world at war, questions are raised about ÔjustŐ and ÔunjustŐ wars, imperialism and patriotism. Jingoistic sentimentality is resisted in favour of objectivity, as the feelings and motivations of the crew members are explored: the Chinese American air gunner had hoped to serve in the U.S. Army Air Force to fight against the Japanese invaders of his homeland; the Jewish navigator felt compelled to join the battle against Nazi Germany. In recounting the harrowing conditions and horrors of bombing missions over Europe, An Emotional Gauntlet emphasizes the interpersonal relationships within the crew and the spirit these men shared. As pilot Jack Nortridge regularly assured his crew, ÔIf you fly with me, IŐm going to bring you home.Ő This book is a testament to their strength and determination. ÔA compelling story. Wright establishes the strong spirit these men shared, based on their pilotŐs pledge that he would bring them back - back from each mission and back to resume their peacetime lives. An Emotional Gauntlet stands out for its integration of pre-war civilian life with wartime experiences. To me, this is the essence of AmericaŐs story in the war, and I am glad to find a book that comprehends this and tells the story from this perspective.Ő - Jerome Klinkowitz, author of Yanks Over Europe: American Flyers in World War II.