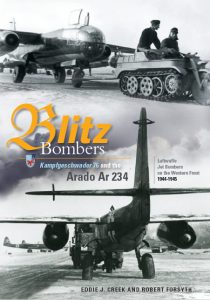 This is the first time that the story of the Arado Ar 234 as the world's first dedicated jet-bomber has been told in such detail in the English language. In late December 1944 the Luftwaffe surprised the Allies when it unexpectedly introduced a new, high-speed bomber to its inventory. Though deployed in small numbers, the Arado Ar 234 B-2 jet-bomber proved itself an effective day and night strike aircraft over the Western Front and a tough challenge for Allied fighter pilots who tried to counter it. Powered by the same Jumo 004 turbojets as the Me 262, the Ar 234 could attack pinpoint targets such as transport hubs or enemy vehicle columns and troop assemblies in 'glide attacks' with a high degree of impunity. The jets were flown by experienced and often highly decorated Luftwaffe bomber pilots who worked hard to master the new aircraft in a short time and amidst the chaotic conditions of a Third Reich in decline. 'Blitz Bombers' tells the story of KG 76's operations when equipped with what was the world's first jet bomber, the Arado Ar 234 B-2. The book is founded on original unit diaries, reports and other records, as well as various German and Allied material drawn from archives and private collections gathered over many years. It traces KG 76's period working up on the aircraft and its subsequent combat operations over the Western Front from December 1944 through to the end of the war. The Geschwader's jets took part in operations over the Ardennes, in the ill-fated Bodenplatte attack of New Year's Day 1945, in missions against the Allied armies driving into the Reich in early 1945, and in a series of intensive strikes against the Ludendorff bridge at Remagen and the bridgehead established there by the Allies in March 1945. Following many years research, the book includes nearly 300 illustrations, comprised of rare photographs of KG 76's aircraft, personnel and equipment, as well as the Allied aircraft and pilots who encountered the Arados in combat, plus key documents taken from the unit's records. These are supplemented by specially commissioned and highly detailed colour artwork depicting the unit's aircraft.