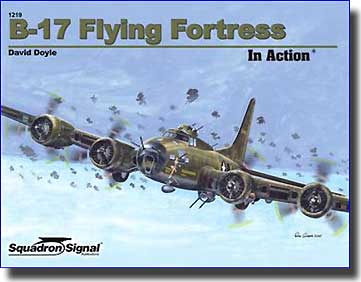 This product was added to our database on Friday 24 August 2018.

The B-17 Flying Fortress dropped more bombs than any other U.S. aircraft in World War II and is arguably the iconic bomber of that epic conflict. This 80-page, perfect bound volume, packed with 200 period photographs, delivers a visual overview of the development and use of the legendary four-engine warplane. During the 10 years in which it was produced, a total of 12,731 of the B-17 heavy bombers rolled off the assembly lines of Boeing, Douglas Aircraft, and Lockheed s subsidiary Vega. First flown in 1935, the aircraft was repeatedly modified, upgraded, and perfected in response to experience gained in the European conflict. While the gross weight of the developmental Y1B-17 was 34,873 lbs, the final model of the aircraft, the B-17G, had a gross weight nearly double that, of 65,500 lbs a testimony to the innovations incorporated in the Fortress. In addition to the steady technical advance of the B-17, this volume also highlights the roles played by individual aircraft and their crews, such as the Memphis Belle, which completed 25 missions over enemy territory and starred in a wartime Hollywood documentary, and the Stage Door Canteen, whose christening by Winston Churchill s daughter attracted such cinema greats as Edward G. Robinson and Vivien Leigh. Photos of the All American, which returned safely to base despite having its tail nearly sheared off by a Messerschmitt, serve as a reminder of the incredible toughness of the Flying Fortress and the uncommon skill of its crewmen. At a time of unprecedented trial, Americans of the greatest generation stood together behind their armed forces. Vivid testimony to this unity of purpose of free individuals are the historic color pictures of the 5 Grand Boeing s 5,000th B-17 which flew into battle covered in the signatures of the hundreds of individual men and women who designed and built her. An unmatched, lavishly illustrated account of one of the greatest warplanes of all time, The B-17 Flying Fortress in Action is a must have! Illustrated with 200 vintage photographs, plus color profiles and detailed line drawings; 80 pages.