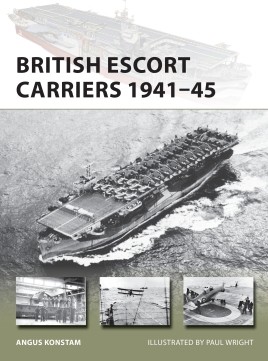 This product was added to our database on Monday 31 August 2020.

In 1941, as the Battle of the Atlantic raged and ship losses mounted, the British Admiralty desperately tried to find ways to defeat the U-Boat threat to Britain's maritime lifeline. Facing a shortage of traditional aircraft carriers and shore-based aircraft, the Royal Navy, as a stopgap measure, converted merchant ships into small 'escort carriers'. These were later joined by a growing number of American-built escort carriers, sent as part of the Lend-Lease agreement. The typical Escort Carrier was small, slow and vulnerable, but it could carry about 18 aircraft, which gave the convoys a real chance to detect and sink dangerous U-Boats. Collectively, their contribution to an Allied victory was immense, particularly in the long and gruelling campaigns fought in the Atlantic and Arctic. Illustrated throughout with detailed full-colour artwork and contemporary photographs, this fascinating study explores in detail how these adaptable ships had such an enormous impact on the outcome of World War II's European Theatre.

Special note, The 1st Dutch Naval HMS Karel Doorman was originally the HMS Nairana, one of these escort carriers.