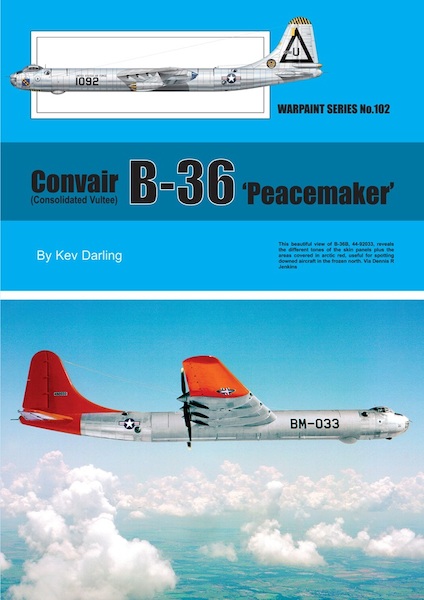 This product was added to our database on Thursday 23 july 2015.

Share this product
Also in this series:
WS-102Hall ParkBooks on aviation
Product description

Conceived when the Americans thought that the stuttering British candle would be snuffed out by Germany, the Consolidated Vultee, Convair, B-36 was intended to take the air war to Europe from the Continental USA. Fortunately Britain hung on and caused the cancellation of the invasion due to the stalwart efforts of the RAF during the Battle of Britain. As global war developed the B-36 programme was put on the back burner as other needs were more pressing. Eventually the B-36 would resume this time as a high altitude long range nuclear delivery platform. Numerous versions entered service with USAF covering both the bombing and reconnaissance versions, both undertaking overseas deployments in support of their intended missions. Continued production of the B-36 caused a great rift with the US Navy whose first super carrier was cancelled to pay for more B-36's that the Admirals regarded as redundant. It would be the emergence of the reliable turbojet engine that would spell the end of the B-36 as a front line aircraft as both the Boeing B-47 and B-52 bombers would quickly see the types demise. Outside the needs of Strategic Air Command there were other uses for the B-36 airframe, one would be used to transport a B-58 Hustler fuselage/ wing assembly for structural testing, another would become the NB-36 and carried a working nuclear reactor aboard whilst the final throw of the dice saw the type developed into the YB-60 eight engined bomber in competition with the B-52. The basic design threw up one more off shoot, the XC-99 transport that saw a new fuselage married to the original wings and fittings plus the original tail feathers, as a unique one off the XC-99 survives in preservation. This book is written by Kev Darling and is superbly illustrated by Richard J.Caruana.