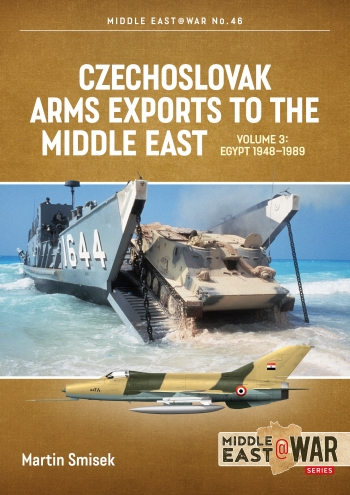 This product was added to our database on Saturday 11 June 2022.

During the Cold War, communist Czechoslovakia was one of the largest arms exporters to the Middle East among the Soviet Bloc countries. The third volume of this mini-series describes the history of arms exports from Czechoslovakia to Egypt including related military assistance.

Although Egypt had expressed interest in buying Czechoslovak arms just before the 1948 Arab-Israeli War, no deliveries were made as Prague fully supported the nascent Jewish state. The situation began to change from July 1950 when Czechoslovakia banned exports of its weapons to Israel. These developments culminated in September 1955, when the first huge Czechoslovak-Egyptian arms deal was concluded. As a proxy of Moscow, Prague delivered impressive quantities of armaments and ammunition together with spare parts, logistics, and support equipment.

At the same time, Czechoslovak military instructors and advisors were also sent to Egypt. A crucial role was played by a group of Czechoslovak Air Force personnel, whose task was to provide the tactical and combat training for two Egyptian fighter squadrons equipped with MiG-15bis jets prior to the Suez Crisis in 1956. At the same time, Egyptian military specialists were trained at the facilities of the Czechoslovak People's Army.

However, from the end of the 1950s, there was a significant reduction in the supply of military hardware from Czechoslovakia because Prague was unwilling or unable to supply the state-of-the-art weapons required by the Egyptians. The focus of Czechoslovak-Egyptian military cooperation in the following years was therefore limited to the establishment of the Military Technical College in Cairo and various military repair facilities around Egypt.

The situation in the supply of Czechoslovak armament to Egypt began to change gradually again in the mid-1960s as the Czechoslovak arms industry commenced the production of a new generation of weapons developed by domestic industry or provided under Soviet licence. A huge boom in arms deals occurred after the Egyptian defeat in the 1967 Arab-Israeli War. During the following years, Czechoslovakia supplied Egypt with OT-62 armoured personnel carriers, T-55 tanks, MiG-21F-13 fighters and L-29 Delfin jet trainers, which subsequently took part in the fighting of the 1973 Arab-Israeli War. A further major turning point came in the mid-1970s with the deterioration of Soviet-Egyptian relations and following instructions from Moscow, Prague was forced to abruptly stop supplying arms to Egypt in 1976.

Using declassified original documentation, this is the most comprehensive and meticulous account of the Czechoslovak military involvement in the Middle East during the Cold War that has ever been published and is extensively illustrated with photographs and original colour artworks.