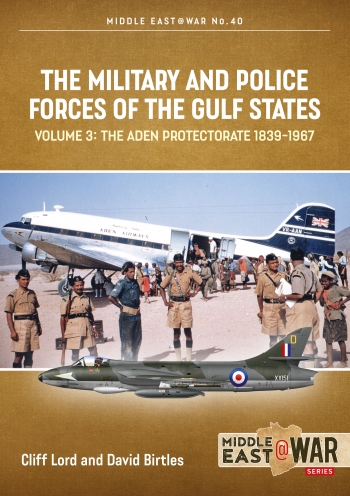 In January 1839, Captain S.B. Haines of the Indian Marine, the East India Company's navy, occupied Aden, a magnificent natural harbour located at the junction of the Red Sea and the Indian Ocean. Britain recognised its strategic importance, and this began a period of rule which lasted until 29 of November 1967. When Britain left South Arabia in 1967 it marked the end of an era – it finalised the period of frontier-style soldiering.

Over the 140 years of British control over Aden, and especially during the times this area was the British Protectorate of Aden, several local military services were established. As a consequence, all had a strong British flavour, as demonstrated by their doctrine, organisation, structure, ranks, uniforms, drill, equipment and other arrangements.

Drawing upon interviews with veterans of the services involved, archival and museum research in Great Britain and the Gulf states, and support from several veteran's associations, Military and Police Forces of the Gulf States, Volume 3, provides an organisational history of each service in pre-independence Aden, along with exclusive photographs, colour profiles and diagrams detailing the uniforms, badges, insignia and equipment of the various forces over the time period until Aden achieved independence in 1967.