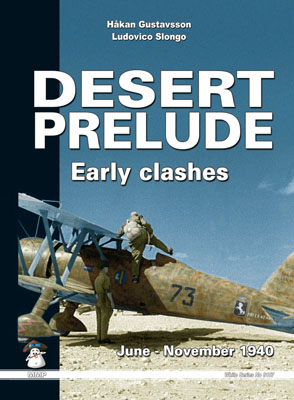 This product was added to our database on Friday 23 April 2010.

The campaign in North Africa in 1940, between Italian and Commonwealth forces, has been little studied or written about. In this, the first of two volumes, the air war from June to November of 1940 is described, along with the associated ground and naval campaigns. For the British and allied forces this was a minor campaign, involving mostly aircraft types considered obsolete elsewhere, and this was the last aerial battlefield between biplane fighters. Nonetheless on both the Italian and British sides the top aces of WW2 made their mark, Teresio Martinoli and Thomas "Pat" Pattle respectively. Profusely illustrated with many rare photos, plus maps and colour profiles, these books are a tribute to those who fought in a forgotten, but significant, campaign. Volume 2, "Desert Prelude – Operation Compass", will complete the story.