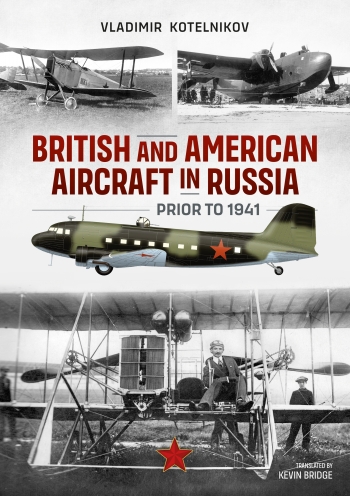 British and American Aircraft in Russia prior to 1941

Back in 1906, the Wright Brothers offered their biplane to the Russian Ministry of War, but Tsarist generals were not interested in this aircraft. In the course of the formation of Russian military aviation in 1910–1911 the regime began to acquire British and American airplanes in large numbers. Their role conceded significantly to the influence of French designs, and under the Provisional Government in 1917 supplies from Britain increased, licences were obtained there for several types that were to be built in Russia. In the Civil War years the Entente powers supported the Whites and the British sent their Air Force units and supplied aircraft. The Red Army had the imported airplanes at their disposal from the stores, as well as aircraft captured from the interventionists and the whites.

In the period of the post-war resurgence of Soviet aviation, a considerable number of British aircraft was acquired. They augmented, to a large extent, the Soviet Air Force fleet. The R-1 reconnaissance aircraft (based on the DH.9) and the U-1 training aircraft (the Avro 504), were put into production on the basis of trophy examples. Prior to the mid-1930s the R-1 biplane was the most widespread aircraft in Soviet aviation and was also exported. This aircraft type participated in a series of local conflicts, and moreover, the R-1 was not a copy of a British original, but a Soviet modification. In this period, examples of various military and civil airplanes were also purchased in Britain, to serve as study aids.

From the end of the 1920s onwards almost all the aircraft operating in the USSR were indigenously produced machines. The purchase of examples in Britain continued, however, but not everything that was on the purchase list was actually acquired, rejections would often arise over security concerns, or there was no willingness to sell individual airplanes.

Following President Franklin Roosevelt's election in the United States, the centre of gravity for Soviet aviators shifted to the United States. In the mid-1930s a series of licensing agreements were concluded, and as a result three American types entered series production in the Soviet Union. Of these, the most widespread was the PS-84 (the Li-2), the Soviet variant of the DC-3. The history of these types is documented in full, taking the story beyond the confines of 1941. The introduction of American technology, and of new materials, really made a difference to Soviet aircraft manufacturing.

Apart from that, individual examples of aircraft were purchased in the United States for polar aviation, search and rescue, and for record-breaking long-range flights. Some British and American aircraft emerged after the Baltic States became part of the USSR, and these machines entered both civil and military aviation.

The author spent a great deal of time searching for the materials that formed the basis of this book in various archives, museums, libraries, and private collections. This subject has never been covered so broadly before, nor in such detail. The publication comes with a large number of illustrations, some of which are published for the first time.