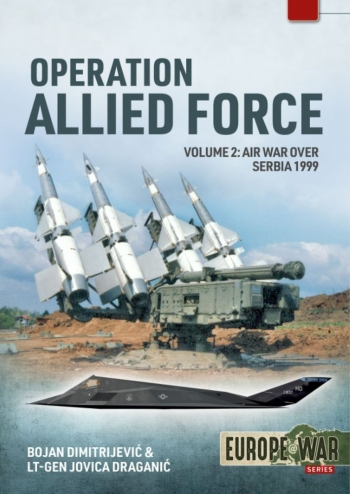 On 24 March 1999, the North Atlantic Treaty Organisation (NATO) launched Operation Allied Force against Serbia, claiming that Serb forces in Kosovo were engaged in ethnic cleansing and gross violations of human rights. Serbia, in turn, claimed to be fighting against an insurgency. This would be the last war in Europe during the 20th century.

The second volume of Operation Allied Force provides in depth analyses of the operation. The authors have analysed the experiences of both sides, starting from the command chain of the aviation of both air forces and the operations of the Yugoslav/Serb air defences.

This book explains many "firsts" that occurred in Operation Allied Force: the use of B-2A stealth bombers, new SEAD aviation tactics, and new munitions ranging from JDAM, JSOW to Graphite bombs. It also examines the tactics of Serbian air defences to minimize the effects of the air strikes, by adopting movement and improvisation. Finally, the authors reveal the level of damage and casualties on the FR Yugoslavia side and comments upon the aircraft losses on both sides.

The analyses are based upon original data as the authors, both the members of the joint Serbian Air Force/USAFE team which analysed Operation Allied Force in 2005-2006, received the opportunity to compare the experiences of both sides.

Operation Allied Force, Volume 2 is illustrated with photographs, diagrams and other illustrations from FRY/Serbian Air Force, official USAF/NATO photographs from the US National Archives and original colour artworks commissioned for this project.

The F-4 Phantom II US Air Forces in Europe (BACK IN STOCK!)

Keyholder with REMOVE BEFORE FLIGHT on both sides, red background

Bagagetag with 737 on one side and writable backside, including metal wire