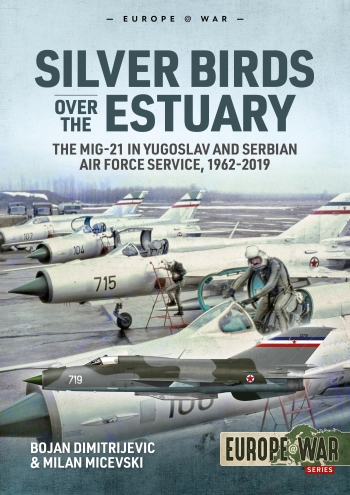 The Mikoyan i Gurevich MiG-21 has been built in greater numbers than any other combat aircraft since 1945. It also saw service with more air forces than any other type manufactured over the last 70 years.

Locally designated the 'L' (for Lovac or fighter), for more than half a century over 260 MiG-21s in 12 different versions and sub-variants formed the backbone of the Yugoslav Air Force and Air Defence Force (JRV i PVO) and later the Serbian Air Force (RV i PVO).

Entering service at the peak of the Cold War, the MiG-21 quickly replaced the US-supplied North American F-86E and F-86D Sabres in the Yugoslav inventory. The first version, MiG-21F-13, was followed by the MiG-21PFM in 1967, and MiG-21M/MF in 1970. Serving with the 204th Fighter Regiment, the task of these fighters was the air defence of Belgrade, capital of Yugoslavia.

Whenever a new and more advanced variant became available, older types were handed over to other units. This is how the 117th Fighter Regiment came into being, based at the famous underground air base outside the town of Bihac. The Pristina-based 83rd Fighter Regiment followed in 1972.

In Tito's Yugoslavia, the MiG-21 was also deployed for strategic reconnaissance. In 1968-1969, the JRV i PVO introduced the MiG-21R to service, which became the primary photo- and electronic reconnaissance platform of the entire military. The importance of the fleet was further increased in 1984, when US-made Fairchild KA-112 LORAP containers were added to their arsenal.

The final and most widely used version became the MiG-21bis, delivered to Yugoslavia in the 1977-1983 period. By the time of the dissolution of the country, in 1991-1992, it formed the backbone of the fleet and saw intensive combat service as a fighter-bomber during the conflicts in Slovenia, Croatia, and Bosnia and Herzegovina. Of particular interest during this period was the widespread use of diverse ordnance of native and NATO-origins.

While operated by the RV i PVO, MiG-21s did not fly any combat sorties during NATO's campaign against the Federal Republic of Yugoslavia of 1999 – better known as the 'Kosovo War'. Nevertheless, it was intensively targeted by NATO's air power, resulting in destruction of nearly half the fleet.

Although subsequently considered 'obsolete', and operated in continuously declining numbers, the MiG-21bis continued soldiering on with the RV i PVO, and even maintained quick reaction alert duty until late 2015, when officially retired. The final handful of two-seat conversion trainers is still in service as this volume is prepared.

The book is based upon the author's extensive research in Serbian and Croatian archives, museums and interviews with veterans that flew this type. Most of the photos in this volume have never been published before.

Portuguese Dragoons 1966-1974 The Return to Horseback