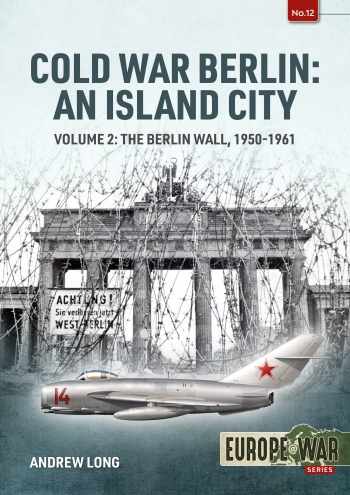 From the moment the DDR was formed in 1949, many of its citizens chose to leave to start a new life in the West. By the mid-1950s, the trickle had turned into a flood as large numbers rejected Walter Ulbricht's Communist paradise. His 'Workers' & Peasants' State' could not afford to lose the skills and productivity from these key workers, so he proposed a radical solution – physically stop them leaving by fencing in the whole population. His plan would fortify the Inner German Border from the Baltic to the Czech border and would build a Wall around West Berlin to stop the flow of East German refugees to the West. It was a bold, innovative, and desperate move from a morally bankrupt and failing state.

This book explores the background and build-up to this monumental decision, reviewing the dramatic geo-political developments of the 1950s and early 1960s as international tensions threatened the post-war peace. Berlin was becoming the front-line in the new Cold War and would witness some of its most dramatic and dangerous moments.

It examines in detail how Operation Rose, the August 1961 operation to close the border between East and West Berlin, was planned and executed and looks at how the world reacted, including the tense stand-off at Checkpoint Charlie in October 1961 between American and Soviet tanks, which could have so easily escalated into the Third World War.

The book looks at how the East Germans developed and 'improved' the Wall over time with brutal efficiency, creating a highly fortified barrier, manned by elite troops. Despite that, many brave and enterprising individuals risked everything to try to escape to the West over, under or through the Wall. Some made it, but many were captured or killed attempting it.

This is the second title from the author in a series of books on Cold War Berlin. It concentrates on the years 1950 to 1961, picking up where the first book finished, but also looks at developments of the Wall right through to the 1980s. The text is accompanied with numerous photos, maps, diagrams, and illustrations, which help tell this fascinating story.