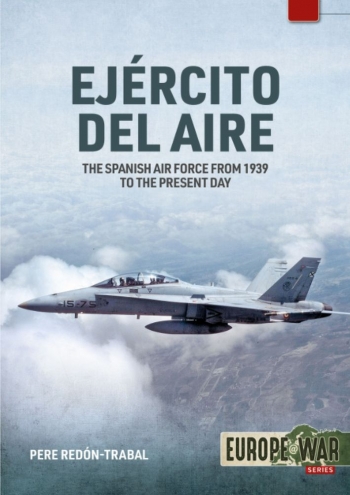 Ejťrcito del Aire: The Spanish Air Force from 1939 to the present day

This book includes, for the first time and in great detail, the current types of aircraft in service in the Ejťrcito del Aire (EA), the Spanish air force, with a brief history of their incorporation into the various Wings, Squadrons and Groups. Several tables, updated in 2021, contain the name given by the manufacturer and the EA to each aircraft type, as well as registration numbers, unit indicative, serial numbers of the aircraft of North American origin, the constructor number, the date of entry into service and, if applicable, the date of technical withdrawal or accident. In this way the reader will be able to identify each aircraft, the unit to which it belongs and the base from which it operates.

The book contains the designation and location of all units supporting the combat forces. In the case of air defence, the locations and types of radar are described in detail. The air-to-air and air-to-ground exercise and training ranges are also included. Mention is also made of flight personnel (pilots), ground personnel (mechanics) and civilian personnel in the service of the EA.

In relation to armament, each of the types of weapons with which aircraft are equipped (bombs, missiles, torpedoes, cannons, and machine guns) are briefly described. The weapons for the defence of air bases are also described.

An extensive reference to the Spanish aeronautical industry is also included. A section describes the international missions that the EA has carried out in the past and present.

Finally, mention is made of all kinds of means that the EA employs to support aircraft and personnel stationed at air bases.