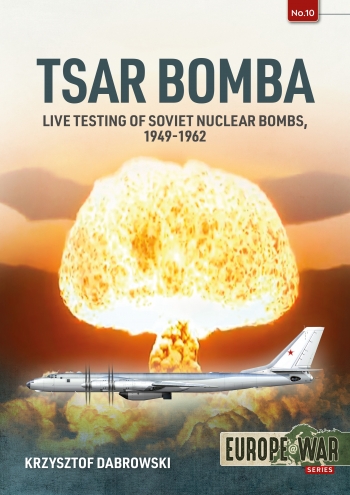 On 30 October 1961, the Union of Soviet Socialist Republics (USSR/Soviet Union) conducted a live test of the most powerful nuclear weapon ever created. Codenamed 'Ivan', and known in the West as the 'Tsar Bomba', the RDS-202 hydrogen bomb was detonated at the Sukhoy Nos cape of Severny Island, Novaya Zemla archipelago, in the Barents Sea.

The Tsar Bomba unleashed about 58 megatons of TNT, creating a 8-kilometre/5-mile-wide fireball and then a mushroom that peaked at an altitude of 95 kilometres (59 miles). The shockwave created by the RDS-202 eradicated a village 55 kilometres (34 miles) from ground zero, caused widespread damage to nature to a radius of dozens of kilometres further away, and created a heat wave felt as far as 270 kilometres (170 miles) distant. And still, this was just one of 45 tests of nuclear weapons conducted in the USSR in October 1961 alone.

Between 1949 and 1962, the Soviets set off 214 nuclear bombs in the open air. Dozens of these were released from aircraft operated by specialised test units. Equipped with the full range of bombers – from the Tupolev Tu-4, Tupolev Tu-16, to the gigantic Tu-95 – the units in question were staffed by men colloquially known as the 'deaf-and-dumb': people sworn to utmost secrecy, living and serving in isolation from the rest of the world. Frequently operating at the edge of the envelope of their specially modified machines while test-releasing weapons with unimaginable destructive potential, several of them only narrowly avoided catastrophe.

Richly illustrated with authentic photographs and custom-drawn colour profiles, Tsar Bomba is the story of the aircrews involved and their aircraft, all of which were carefully hidden not only by the Iron Curtain, but by a thick veil of secrecy for more than half a century.