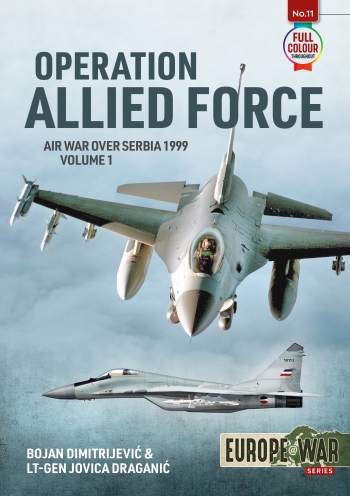 Lasting 78 days, this was an unusual conflict fought at several levels. The campaign was fought at the negotiation tables, in the media, and via cyber warfare. In the air, NATO sought to destroy or at least minimise the capability of the Serbian forces, while on the ground the Serbian forces fought the Kosovo-Albanian insurgency. It had an unusual outcome, too: without NATO losing a single soldier in direct action, they still forced the Serbian authorities and armed forces to withdraw from Kosovo, which in 2008 then proclaimed its independence. In turn, the war inflicted serious human and material losses upon the Serbian's and the air force was particularly devastated by air strikes on its facilities. Nevertheless, many within NATO subsequently concluded that the skies over Serbia were as dangerous on the last night of this conflict as they were on its first.

Largely based on cooperation with the joint commission of the Serbian Air Force and the U.S. Air Force in Europe (USAFE), Volume 1 of Operation Allied Force provides a detailed overview of NATO's aerial campaign, including reconstructions of operations by 'stealth' aircraft such as the F-117A and B-2A, and the only loss of an F-117A in combat. Volume 1 of Operation Allied Force also offers a detailed reconstruction of the planning and conduct of combat operations by the Serbian Air Force and Air Defence (Ratno vazduhoplovstvo i protivvazdušna odbrana, RV i PVO) with a special emphasis on the attempts of its sole MiG-29 squadron and its surface to air missile batteries to challenge enemy strike packages.

The volume is fully illustrated in colour with a rich collection of exclusive photographs from both sides of the conflict, along with an extended 16-page section of custom-drawn full-colour artworks, and provides a set of entirely new and unique insights into what was the last war fought in Europe during the 20th century.

The F-4 Phantom II US Air Forces in Europe (BACK IN STOCK!)

Keyholder with REMOVE BEFORE FLIGHT on both sides, red background