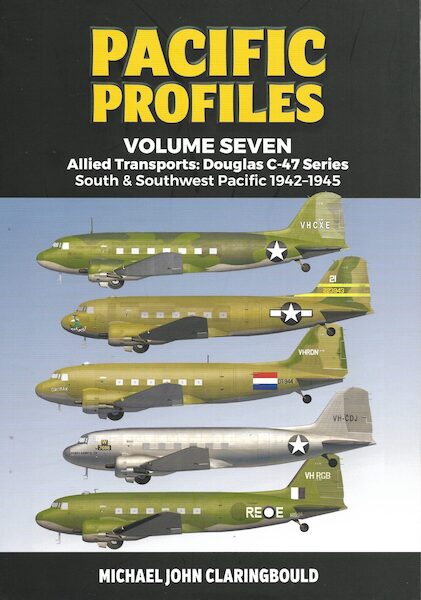 This product was added to our database on Wednesday 24 August 2022.

The Pacific Profiles series presents the most accurate WWII profiles of aircraft which served in the South Pacific theatre.

Volume Seven covers the Douglas C-47, including numerous derivatives such as the C-53, R4D and DC-3. This was the most universal aircraft type to appear in the South Pacific and was deployed from day one to the cessation of hostilities. It was utilised by every military organisation including eighteen Fifth and Thirteenth Air Force USAAF squadrons, and also by the USN, USMC, RAAF, RNZAF, RAF and Dutch Air Force.

Most profiles are presented for the first time, alongside a full explanation of the markings. Frequent trading of airframes between units resulted in wide-ranging heraldry, unit markings and nose art. In particular until now there has been a paucity of information about the markings of Thirteenth Air Force C-47s and USMC R4Ds, a gap largely filled by this volume.

This volume illustrates the development of unit markings from the first commandeered DC-3 airliners in Australia through to the RNZAF C-47s used in the last days of the Pacific War in the Solomons. The profiles are accompanied by unit histories and photos. A wide range of reference material has been consulted including photos, colour movies, official records, diaries and information from wreck sites.

The author, Michael Claringbould, is world-renown for his expertise on the Pacific air war. Never before have such meticulous colour profiles of the C-47 series been illustrated with such detailed and accurate markings.