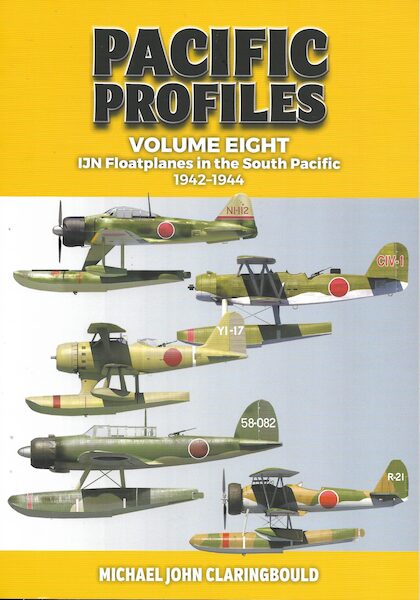 This product was added to our database on Wednesday 24 August 2022.

Volume Eight of the Pacific Profiles series presents the most accurate profiles and histories to date of Imperial Japanese Navy floatplanes which served in the South Pacific theatre, throughout New Guinea and the Solomons. The markings of the six floatplane types deployed in the theatre are covered: the A6M2-N Rufe, E8N2 Dave, E13A1 Jake, F1M2 Pete, E9W Slim and E7K Alf.

Floatplane operations commenced in January 1942 with the invasion of Rabaul. Later Rufes were often misidentified as Zeros with their presence in the Solomons seemingly ubiquitous. Petes often fought Allied fighters, with other types focused on reconnaissance and occasional bombing missions, sometimes at night. Most floatplane activity had ceased by late 1943, leaving a handful of stay-behinds operating from Rabaul and Kavieng.

Illustrated, unit by unit, are examples of the varied types of markings, camouflage and tail code systems which appeared on floatplanes assigned to sea tenders, shore, ship and submarine-based units. Each of the 76 profiles cites draws on evidence from colour photos, Combined Fleet orders, POW interrogations, technical reports and post-war wreck surveys. Brief histories of every unit includes their role in the theatre and defines the ever-changing markings systems as ordained by Tokyo. Numerous maps and diagrams help the reader understand command structures such as the R-Area Air Force and the 11th Seaplane Tender Division.

Never before have such accurate profiles been presented, most for the first time. The author is world-renown for his expertise in Japanese aerial warfare in the Pacific.