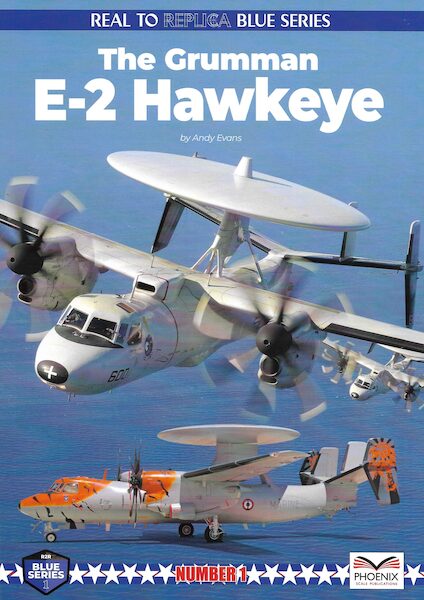 This product was added to our database on Monday 23 May 2022.

The Grumman E-2 Hawkeye was designed and developed during the late 1950s and early 1960s for the US Navy as a replacement for the earlier, piston-engine E-1 Tracer, which was rapidly becoming obsolete. The E-2 was the first aircraft designed specifically for its role, as opposed to a modification of an existing airframe. The E-2A Hawkeye entered US Navy service in January 1964 and in April 1964 with VAW-11 at NAS North Island. The first deployment was aboard the aircraft carrier USS Kitty Hawk during 1965. Since entering combat during the Vietnam War, the E-2 has served the US Navy around the world, acting as the electronic 'eyes of the fleet'. In August 1981, a Hawkeye from VAW-124 Bear Aces directed two F-14 Tomcats from VF-41 Black Aces in an intercept mission in the Gulf of Sidra that resulted in the downing of two Libyan Sukhoi Su-22s. Hawkeyes from VAW-123 aboard the aircraft carrier USS America directed a group of F-14 Tomcat fighters flying the Combat Air Patrol during Operation El Dorado Canyon, the joint strike of two Carrier Battle Groups in the Mediterranean Sea against Libyan targets during 1986. More recently, E-2Cs provided the command and control for both aerial warfare and land-attack missions during the Gulf War. Navy E-2Cs have been upgraded with eight-bladed propellers as part of the Hawkeye 2000 program, and the first squadron to cruise with the new propellers was VAW-124 'Bear Aces'. The Hawkeye 2000 version can track over 2,000 targets simultaneously while also detecting 20,000 targets to a range greater than 400 miles and simultaneously guide 40–100 air-to-air intercepts or air-to-surface engagements. In 2014, several E-2C Hawkeyes from the 'Bear Aces' were deployed from USS George HW Bush as flying command posts and air traffic controllers over Iraq during Operation 'Inherent Resolve' against the Islamic State. During Operation 'Enduring Freedom' and Operation 'Iraqi Freedom' all ten Regular Navy Hawkeye squadrons flew overland sorties, providing battle management, close-air-support coordination, and combat search and rescue duties. VAW-120, the E-2C fleet replacement squadron began receiving E-2D Advanced Hawkeyes for training use in July 2010, and on 27 March 2014, the first E-2Ds were delivered to VAW-125. The E-2D will play a larger role than that of the E-2C, with five E-2Ds aboard each carrier instead of four C-models. In smaller numbers of E-2s have been sold to the armed forces of Egypt, France, Israel, Japan, Mexico, Singapore and Taiwan. This 100-page full colour 'Blue Series' book looks in detail at the history and employment of the Hawkeye, with photographic references, walk arounds, and as the 'Real to Replica' title suggests there is a section on how to model the E-2 using Kinetic kits, making this book and ideal resource for both the enthusiast and scale modeller alike.