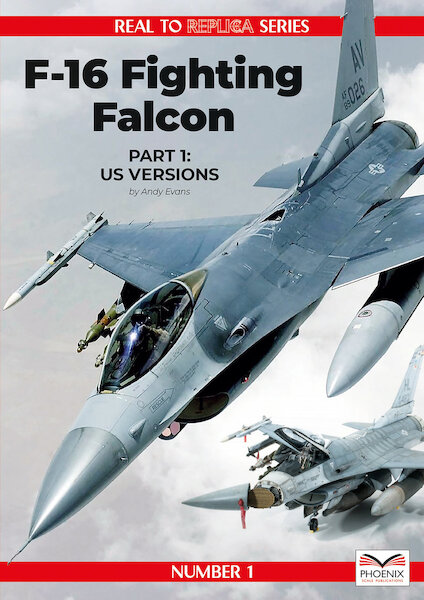 This product was added to our database on Monday 24 January 2022.

The Real to Replica book series presents, as the title suggests, a publication that has both historic references, aircraft details, colour artwork and modelling projects on a particular aviation subject. Titles will include subjects from World War I through to present day and written by renown authors.

The F-16 Fighting Falcon is a single-engine multirole fighter aircraft originally developed by General Dynamics for the United States Air Force. Designed as an air superiority day fighter, it has evolved into a highly successful all-weather multirole aircraft, and over 4,600 aircraft have been built since production was approved in 1976. Although no longer being purchased by the USAF, improved variants continue to be built for export customers, up to and including the latest F-16V 'Viper' version. The Fighting Falcon's key features include a frameless bubble canopy for better visibility, side-mounted control stick to ease control while manouvering, an ejection seat reclined thirty-degrees from vertical to reduce the effect of g-forces on the pilot, and the first use of the relaxed static stability/fly-by-wire flight control system, that helps to make it an agile aircraft. The F-16 has an internal M61 Vulcan cannon and eleven locations for mounting weapons and other mission equipment and can carry fuselage mounted conformal fuel tanks and a variety of targeting pods and ECM equipment. The F-16's official name is 'Fighting Falcon', but 'Viper' is most commonly used by its pilots and crews, due to a perceived resemblance to a viper snake as well as the 'Colonial Viper' starfighter on the TV show Battlestar Galactica which aired at the time the F-16 entered service. In addition to active duty in the US Air Force, Air Force Reserve Command, and Air National Guard units, the aircraft is also used by the 'Thunderbirds' aerial demonstration team, and as an adversary/aggressor aircraft by the United States Navy. The F-16 has also been procured to serve in the air forces of over twenty-five other nations. The initial production-standard F-16A flew for the first time on 7 August 1978 and its delivery was accepted by the USAF on 6 January 1979, entering USAF operational service with the 34th Tactical Fighter Squadron, 388th Tactical Fighter Wing at Hill AFB in Utah on 1 October 1980. The US Air Force, including the Air Force Reserve and the Air National Guard, flew the F-16 in combat during Operation 'Desert Storm' in 1991 and in the Balkans later in the 1990s. F-16s also patrolled the no-fly zones in Iraq during Operations 'Northern Watch' and 'Southern Watch' and served during the wars in Afghanistan (Operation 'Enduring Freedom') and Iraq (Operation 'Iraqi Freedom') from 2001 and 2003 respectively and Air Force F-16s took part in the intervention in Libya.

Mikoyan MiG29 Fulcrum in Air Forces around the World