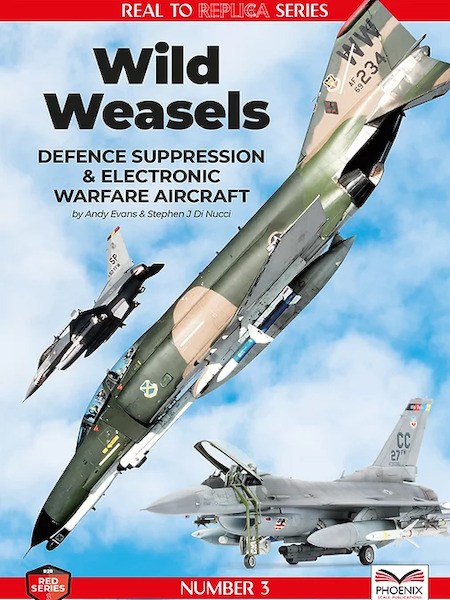 This product was added to our database on Thursday 14 july 2022.

The Real to Replica book series presents, as the title suggests, a publication that has both historic references, aircraft details, colour artwork and modelling projects on a particular aviation subject. Titles will include subjects from World War I through to present day and written by renown authors.

Suppression of Enemy Air Defences (SEAD) are military actions to subdue enemy surface-based air defences, including not only surface-to-air missiles (SAMs) and anti-aircraft artillery (AAA), but also interrelated systems such as early-warning radar and command, control, and communication (C3) functions, while also marking other targets to be destroyed by an air strike. Suppression can be accomplished both by physically destroying the systems or by disrupting and deceiving them through electronic warfare. In modern warfare SEAD missions can constitute as much as thirty percent of all sorties launched in the first week of combat and continue at a reduced rate through the rest of a campaign. One quarter of American combat sorties in recent conflicts have been SEAD missions. Electronic warfare (EW) on the other hand is any action involving the use of the electromagnetic spectrum (EM spectrum) or directed energy to control the spectrum, attack an enemy, or impede enemy assaults. The purpose of electronic warfare is to deny the opponent the advantage of, and to ensure friendly unimpeded access to the EM spectrum. EW can be applied from air, sea, land, and/or space by manned and unmanned systems, and can target communication, radar, or other military and civilian assets. These airborne roles were in their infancy during World War II and the Korean War but came to prominence during the Vietnam War with the advent of the dedicated 'Wild Weasel' role, a code name given by the United States Air Force to an aircraft, of any type, equipped with anti-radiation missiles and tasked with the SEAD - destroying the radar and surface-to-air missile installations of enemy air defence systems. The 'Wild Weasel' concept was developed by the United States Air Force in 1965, after the introduction of Soviet SAMs and their downing of US strike aircraft over the skies of North Vietnam. 'Wild Weasel' tactics and techniques began their development in 1965 following the commencement of Operation 'Rolling Thunder' and were later adapted by other nations The term 'Wild Weasel' derives from Project 'Wild Weasel', the USAF development program for a dedicated SAM-detection and suppression aircraft. The technique was also called an 'Iron Hand' mission, though technically this term referred only to the suppression attack before the main strike. Originally named 'Project Ferret', denoting a predatory animal that goes into its prey's den to kill it, the name was changed to differentiate it from the code-name 'Ferret' that had been used during World War II for radar counter-measures bombers. In brief, the task of a Wild Weasel aircraft is to bait enemy anti-aircraft defences into targeting it with their radars, whereupon the radar waves are traced back to their source, allowing the Weasel or its teammates to precisely target it for destruction. Since then, SEAD and EW has been used in the Gulf Wars an in NATO operations over Bosnia and Kosovo. The unofficial motto of the Wild Weasel crews is 'YGBSM' – 'You Gotta Be Shittin' Me'. This appears prominently on the logo patch of some squadrons. As the story goes, this was the response of Jack Donovan, a former B-52 EWO (Electronic Warfare Officer), whereupon learning that he was to fly back seat to a self-absorbed fighter pilot while acting as flypaper for enemy SAMs, his exact words were: 'I'm gonna fly with you, and we're gonna shoot a SAM site before it shoots us? You gotta be shittin' me'. In this book we examine the background of these specialised roles from World War II, through Vietnam to modern day, and look at the aircraft that undertake them.

Mirage IIIE,IIIO and Mirage 5 Cyrano in the world