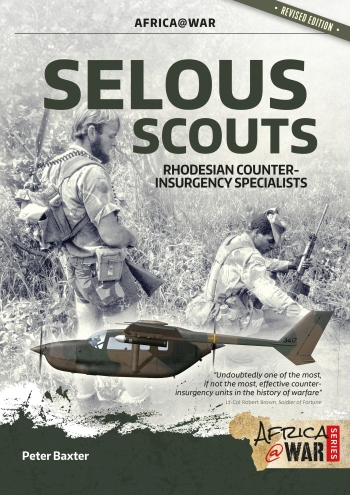 Formed in 1973 by the legendary Lieutenant-Colonel Ron Reid-Daly at the behest of Rhodesian military supremo General Peter Walls, the Selous Scouts were to write their name into the annals of military history as one of the finest counterinsurgency units of all time, through their innovative pseudo-guerrilla tactics, brilliant reconnaissance operations into Zambia and Botswana and daring flying-column raids into Mozambique. Feared and hated by the liberation movements ZIPRA and ZANLA, the Scouts wreaked untold havoc and destruction on their Soviet- and Chinese-backed enemies, accounting for 68% of guerrilla casualties within Rhodesia alone during the bitter bush war of the 1970s. Uniquely ahead of its time, the regiment - a brotherhood of men that traversed cultural and racial barriers; their Shona motto was 'Pamwe Chete' (together only) - was to produce the type of soldier that earned for the unit one Grand Cross of Valour, nine Silver Crosses and 22 Bronze Crosses of Rhodesia. AFRICA@WAR SERIES At any given time, there are at least half a dozen conflicts taking place in Africa, from civil strife and brutal insurgencies to full-blown conventional wars. Yet, apart from the grand campaigns and battles of colonial yesteryear—Omdurman, Isandlwana, Spioenkop et al—little is known outside the Dark Continent of the plethora of brushfire wars that occur with monotonous regularity. Following the Second World War, with the colonial powers—Britain in particular—looking to divest themselves of their burdensome empires, the 'winds of change', fuelled by the Cold War, swept through every nook and cranny of the continent. From Algeria to South Africa, from the Congo to Kenya, the continent literally erupted in conflict. Butchery and barbarism, under the guise of Black Nationalism, became bywords of African insurgencies; the tactics of terror, so espoused by Chairman Mao, one of the principal backers—in competition with Soviet imperialism—of African liberation movements, became standard operating procedure. Africa—the continent that gave the world 'pseudo' counterterrorist operations as developed in Kenya to combat the Mau Mau, the Rhodesian Fireforce concept, radical innovations in vehicle mine-proofing, South African armour which fought the Cubans to a standstill at Cuito Cuanavale in the largest continental tank battle since Alamein, MiG and Mirage dogfights over the skies of Angola—is not all doom and gloom: it is as rich in its cultural diversity as it is in its martial traditions. Apart from a colourful array of liberation movements, mercenaries, brigands, pirates and terrorists, the cast includes such legendary units as the King's African Rifles, the Portuguese Flechettes, the French Foreign Legion, the Rhodesian Selous Scouts and SAS, and the South African Recces, 32 Battalion and Koevoet. Africa@War, a ground-breaking series, studies Africa's post-1945 conflicts and military players in an informative and entertaining manner, examining some of the lesser known campaigns and shedding new light on some of the better known operations. "Undoubtedly one of the most, if not the most, effective counter-insurgency units in the history of warfare" Lt-Col Robert Brown, Soldier of Fortune magazine "Africa@War is a ground-breaking series concept, studying Africa's conflicts and military players in an informative and entertaining manner, examining some of the lesser-known campaigns and shedding new light on some of the better-known operations … great models of what the combination of authors and publishers can produce by way of useable case studies for the market place in a concise illustrated format.  They are recommended as professional military education references."  Charles D. Melson, Chief Historian, U.S. Marine Corps "Each of the books in this series is a well-documented and researched synopsis of the events that they are focused upon. They layouts and presentation are logical and of a very high quality ... As an introduction to this field of operation, this series is outstanding. A definite asset for those wishing to improve their knowledge and understanding of the development of successful, multi-faceted doctrine in the fight against insurgent/assymetric war."  Major Chris Buckham, Royal Canadian Air Force Journal