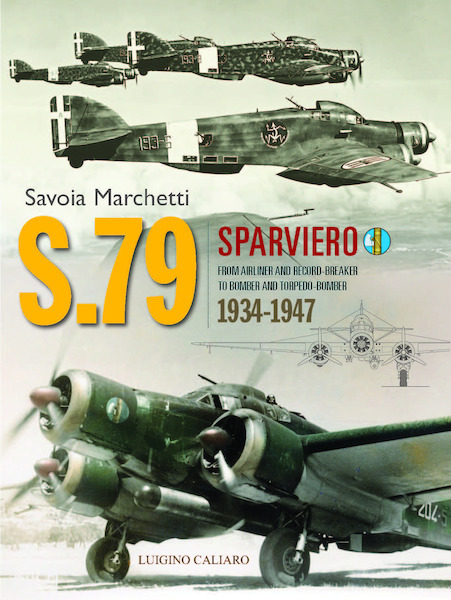 The Savoia-Marchetti S79 Sparviero, from Airliner and Recordbreaker to Bomber and Torpedo Bomber 1934-1947

This product was added to our database on Tuesday 27 September 2022.

The elegant, three-engined Savoia Marchetti S.79 'Sparviero' (Sparrowhawk) was for a period the fastest medium bomber in the world. Designed by Alessandro Marchetti, the first prototype was produced in September 1934 and over 1,300 aircraft were built up to 1943.

During the 1930s, the S.79 made several record-breaking long-range flights to North and East Africa, the Middle East and South America and also was used as an airliner. The S.79 first saw combat in the Spanish C ivil War where, from 1937, it carried out bombing operations against a range of Republican targets including ports and strikes against shipping. During the Second World War, the Regia Aeronautica first deployed the S.79 as a conventional bomber against targets in France, C orsica and Tunisia in 1940 as well as in Italian East Africa and in the Mediterranean where the aircraft saw intensive operations over Malta. The S.79 gained a deserved reputation as a highly effective torpedo-bomber, carrying out several notable attacks against Royal Navy warships including a damaging strike against the British aircraft carrier HMS Indomitable in July 1943.

In this book, aviation historian and photographer, Luigino C aliaro, presents the full story of the S.79, exploring its origins, design, development, construction and operations, as well as offering a detailed account of its civilian, twin-engine and export variants, and projected developments. The book is enhanced by hundreds of rare photographs, colour artworks and detailed technical drawings, making this the most comprehensive account of this interesting and successful aircraft to be published in the English language.

Dornier Do217: A combat and photographic record in Luftwaffe Service 1941-1945