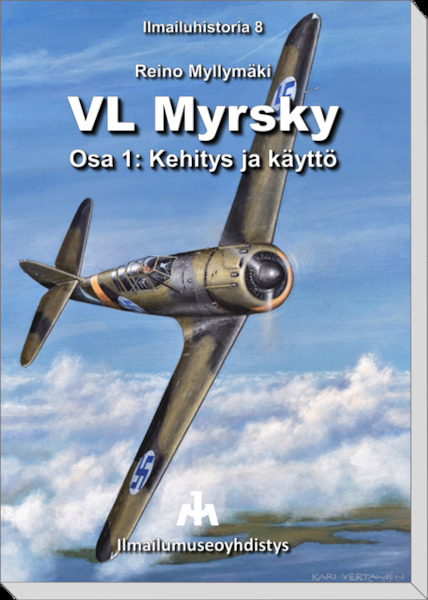 This product was added to our database on Tuesday 20 September 2022.

The book tells the story of the only domestic fighter plane that ever made it into serial production. The birth words of a domestic fighter aircraft were already spoken before the Winter War in the spring of 1939. Due to various delays, Myrsky did not get its planned use as a fighter jet until the last weeks of the Continuation War, after which the plane was used in the Lapland War and in peacetime service until 1947. The last flight with the aircraft type was made on February 10, 1948. The use of the Storm was stopped by structural weaknesses caused by bad wartime adhesives and varnishes and other substitute materials, but also by the Paris Peace Treaty, which limited the number of combat aircraft. The decommissioning of the Storm in time launched another controversial aircraft project, namely the Valmet Vihuri.

Despite its minor success, Myrsky's story is worth getting to know. It tells about the Finnish desire not to rely solely on foreign help and how, under difficult conditions, Finnish engineers developed a fighter aircraft that is completely comparable to foreign alternatives, and on the side, many innovations, such as the first modern flight data registration device, the so-called "black box". The crash of the MY-3 plane on November 19, 1943 also became the first plane accident solved with black box information. Also, after the war, the mechanical computer developed to facilitate the calculation of the aeroelastic vibration of the Storm's wing and tail - the input integraf - became a small sensation in mathematician circles. The storm also fits the prevailing ideals in the best possible way,

This book is compiled from the history section of seven VL Myrsky - History and restoration publications published between 2015 and 2020, supplemented with new information, research results and photographs. A separate work on the restoration part of the machine type will be published later.

The author of the book is an aviation history enthusiast from the Air Museum Association and spokesperson for the VL Myrsky II restoration project since 2013.