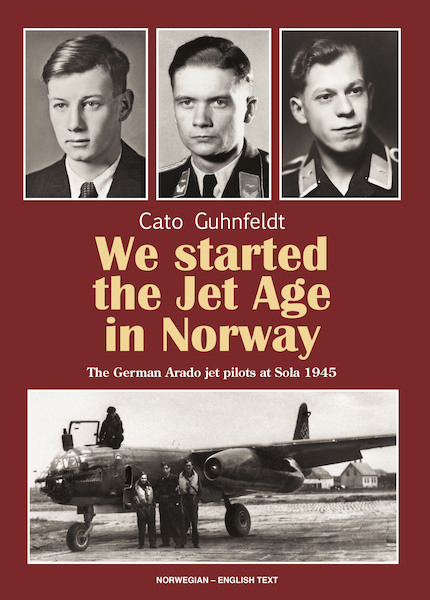 We started the Jet Age in Norway: The German Arado jet pilots at Sola 1945

This product was added to our database on Thursday 24 february 2022.

The story of the few German Luftwaffe pilots who flew the Arado Ar 234 "Blitz" jet out of Norway towards Great Britain in the spring of 1945.

The first part of "We started the Jet Age in Norway" describes the service of the rare German unit Einsatzkommando / Fernaufklärungsgescwader 1  in Norway spring 1945. Up until August 1944 this unit under its former name Fernaufklärungsgruppe 5 operated the large four-engine Junkers Ju 290 aircraft on reconnaissance mission over the North Atlantic. After being de-activated in August 1944 the unit was re-established in January 1945  and soon renamed. A smaller unit equipped with three advanced reconnaissance aircraft, the Arado Ar 234 jet and only two pilots was in February 1945 transferred to Sola airfield outside of Stavanger in Norway. Its task was to carry out reconnaissance missions over Scotland, the Orkney Islands and the east coast of England.

For the first time both the German pilots, Eduard Schmitt and Hellmut Hetz tell about their experiences as jet pilots in Norway at the end of the 2nd WW. It was these two men who launched Norway into the jet age, on sorties above the North Sea at 10 000 metres altitude, with minus 70 degrees outside the cockpit. The reader gets to read about how the Arado aircraft was to fly, about sorties and crashes, but also about technical maintenance and daily life on the ground.

In the book's second half the race between the Aliies to secure from themselves the rare jet aircraft at Sola is described. The British test pilot Eric Brown tells about his experiences in Germany and Norway, furthermore his rare meeting with Hermann Göring. And the Commanding Officer of all German fighter pilots in Norway 1944–1945, Günther Scholz tells about the capitulation at Sola. Then add colour profiles of the German jet aircraft, and photographs supplied by the families of the two German jet pilots.

Mustangs towards Norway: The story of 19 and 65 Squadron at RAF Peterhead 1945

Northrop A17, The complete history of the Northrop attack planes and its export derivatives. Also Includes the Dutch version