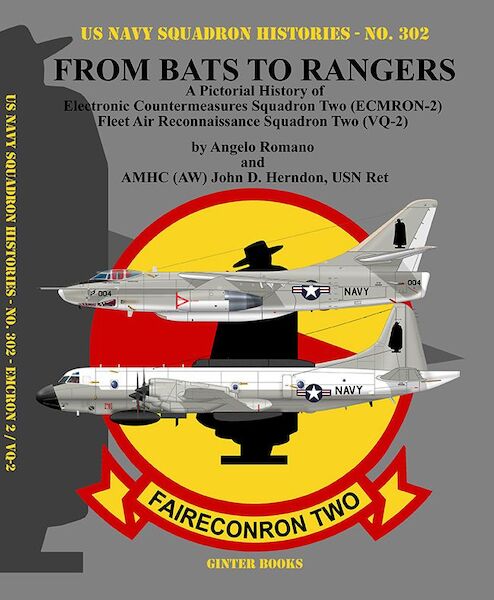 This product was added to our database on Thursday 3 August 2017.

This Pictorial History of US Navy's Electronic Countermeasures Squadron Two (ECMRON-2 or VQ-2), later designated Fleet Air Reconnaissance Squadron Two (FAIRECONRON TWO or VQ-2) by Angelo Romano and AMHC (AW) John D. Herndon, USN, Ret. is the second title of the new US NAVY SQUADRON HISTORIES by GINTER BOOKS. The photo coverage of the history of the Electric Bats, also known as the Rangers, is comprehensive, both in terms of photography and in terms of historical content.


Much of the squadron's mission was top secret, as were many of its cold war missions, but the authors were able to utilize official (declassified) documents and first-hand accounts to write this book. For completeness, it is also a history of the US Navy Electronic Intelligence gathering activities going back to WWII, beginning with the creation of the Cast Mike (Counter Measures) Project in 1942 and the deployment of early XARD receivers aboard aircraft like the Consolidated PBY Catalina and PB4Y Liberator.
After WWII, the Navy started to use the Privateers as dedicated ELINT platforms and assigned them to two special units operating jointly with the National Security Group. One of these units, designated Port Lyautey Patrol Unit (NPU), was based at Naval Air Activities Port Lyautey, in French Morocco. It was first assigned modified PB4Y-1s and later, the Martin P4M-1Q Mercator. The NPU teamed with the Naval Security Group's Naval Communications Unit 32 George (NCU32G), which provided the ELINT equipment installed on board and the crew to operate them, mostly for covert operations around Europe and the Mediterranean.
When the NPU reached its full complement of four P4M-1Qs, the unit and NCU32G, needed to have an administrative identity for budgetary and logistics purposes. Airborne Early Warning Squadron TWO (VW-2), based at NAS Patuxent River, was therefore selected to be its "mother" squadron. On 1 May 1953, NPU Port Lyautey became VW-2 Detachment A (or DET ABLE).
In 1955, the Navy decided to establish a dedicated squadron for the unique mission rather than continue with a detachment: Electronic Countermeasures Squadron TWO (ECMRON TWO) was established on 1 Sep 1955. ECMRON TWO was assigned the alphanumeric designation "VQ-2". Its mission was to conduct electronic-search in support of fleet operations to obtain adequate and timely information on enemy radar, communications, and other emissions in support of fleet operations. The Squadron inherited the P4M-1Qs from VW-2 DET A and acquired a Lockheed P2V Neptune for utility purposes.
On 1 Jan 1960, EMCRON TWO was redesignated Fleet Air Reconnaissance Squadron TWO (FAIRECONRON TWO) but still retained the alphanumeric designation "VQ-2".
In 1956, VQ-2 received its first Douglas A3D-1Q Skywarrior, followed in 1957 by one A3D-1. In 1958, the Squadron received the Lockheed P2V-5F Neptune to augment the P4M-1Qs. The more capable A3D-2Q/EA-3B arrived in 1959 followed by the big Lockheed WV-2Q/EC-121M Constellation in 1960. The first Lockheed EP-3E ARIES arrived in 1971 and the squadron continued to fly this aircraft until disestablishment in 2012.
The VQ-2 history and all worldwide events surrounding it are very well described and documented. This 242-page book contains 180 B&W and 444 color photos, most never published before. Thirty-seven superbly detailed aircraft color profiles show the evolution of the color schemes and markings and the different aircraft types and sub-types, providing very useful information for the benefit of both modelers and aviation historians. The inclusion of many squadron patches completes this masterpiece.

John joined the U.S. Navy in 1978, Assigned to VQ-2 a total of 13 years E-1 to E-7, deployed to six Aircraft carriers in support of the EA-3B aircraft. Additionally deployed to locations all around the world in support of the EP-3E aircraft, Maintenance Control, Aircraft Division and Detachment Leading Chief Petty Officer. Retired out of VQ-2 his last tour which ended in 2000, went on to civilian life, employers ATA and American Airlines and finally the FAA as an Aviation Safety Inspector, currently the Boeing 787 Fleet Program Manager overseeing United Airlines safety compliance. Very involved over the years in collecting VQ-2 information/ history, assisted in raising funds and restoring a VQ-2 EA-3B Aircraft in Fort Worth Texas Ranger 15 BuNo 146453.