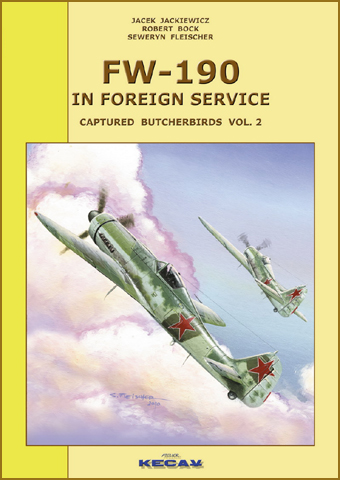 This product was added to our database on Wednesday 9 july 2014.

After the bancrupcy of KECAY Atelier we managed to get one final shipment
When these are gone they are gone forever!!!

English text, soft cover, 100 pages, 215 photos, 112 side profiles. Entire book is published in color
A while back, Atelier Kecay published the first volume on captured Fw 190 Butcherbirds. That book focused on British and American captured aircraft, and it was an impressive volume, filled with great photos and colorful illustrations. This second volume picks up where the first one left off, providing information on some of the smaller nations that captured Fw 190s. Since that wouldn't fill an entire book, this coverage is supplemented with the small air forces that flew or tested the Fw 190, such as Hungary and Japan.
The countries covered in this volume include the Soviet Union, Yugoslavia, South Africa, Romania, Japan, Hungary, Spain, Turkey, France, Sweden, Czechoslovakia, and Poland. There are also a few follow-up aircraft from the first volume, from where new information provided additional details. Like the first volume, this book provides extensive photographic coverage of these aircraft, and complements the photos quite nicely. A very nice feature of these illustrations is that the artist has done the aircraft as seen in the photographs. That means that if the plane is missing the canopy and cowling in the photo, they're gone in the illustration as well. That means that the illustration has no interpreted markings or camouflage.
While Luftwaffe Fw 190s have been covered extensively over the years, the captured and small air force usage of the type opens up quite a bit of interesting subjects for the modeler. This volume, coupled with the first, establishes the best coverage of captured and foreign service Fw 190s out there, and as such should form an essential part of any Focke Wulf reference library.