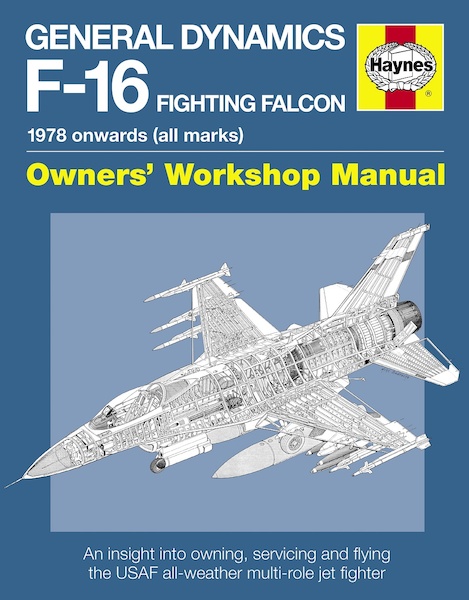 Share this product
Also in this series:
9780857333988HaynesBooks on aviation
Product description

Popularly referred to as the 'Viper' by its air and ground crews, the F-16 is a successful American-built all-weather multi-role jet fighter of which more than 4,500 have been built and exported to 25 countries worldwide. Author Steve Davies covers all aspects of the F-16, focusing specifically on the design and construction of the Block 40/50 F-16C/D version. He also gives coverage of the Viper's impressive combat record in both Gulf Wars, in Afghanistan and over the Balkans, as well as in the Israeli pre-emptive strike in 1981 on the Osirak reactor in Iraq.

The General Dynamics F-16 Fighting Falcon Manual provides a unique insight into the design, evolution, operation and maintenance of the USAF's most numerous fighter jet.

Not only the most numerous modern fighter jet in USAF the 'Viper' is also one of the most successful.

Small, sleek and universally revered, the F-16 has enabled the United States Air Force to implement US foreign policy the world over for more than two decades. Today, the 'Viper' - it's unofficial moniker among the F-16 community - also forms a key component in air forces across Europe, the Middle East and Asia.

The F-16 was born from the visions of a small group of fighter pilots at the Pentagon. Known colloquially as the Fighter Mafia, this group of hardened combat veterans had returned from the air war over Vietnam having learned the lessons of air combat the hard way. Determined to develop a new lightweight fighter that would better the simple but hugely successful adversaries of the then-USSR - the MiG-17, MiG-21, and later designs in particular - these men were uncompromising in ensuring that the design delivered a fighter that was small, highly manoeuverable and unbeatable in close-range combat.

In the years that have followed, that design has evolved into a multi-role fighter that, despite weight gains, can hold its own in the precision strike role, is a dreaded opponent in air-to-air combat, and has even been developed into a Wild Weasel variant for use against threat radar and missile systems. In short, there are few other western fighters that can match the F-16's versatility and prowess.

Today, the Block 40/42 and Block 50/52 F-16CM, on which this book focuses, are the most numerous variants of the Viper in service with the active-duty US Air Force. Deployed to combat zones around the world since 1990, the diminutive fighter has forged a reputation for delivering ordnance on target in all weathers, and for persecuting threat aircraft with alacrity.

The F-16 Fighting Falcon Manual, with the aid of information from official technical publications in the public domain, along with narratives from pilots and maintainers, the fascinating text, supported by numerous technical illustrations and photographs, describes in detail how the F-16 is built, employed as a weapons system, and maintained.

Author: Steve Davies is a freelance military aviation photojournalist and author. This is his third Haynes Owners' Workshop Manual. He is the author of more than a dozen other critically acclaimed books, and he has worked as an adviser for a range of military aviation documentaries in the UK and US. His photography has been used by the aviation press and leading defence contractors and aviation corporations.