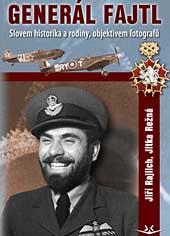 This product was added to our database on Tuesday 24 july 2012.

Representative imagery and biography generously subsidized real legends of Czechoslovak Air Force. Retired Gen. Francis Fajtl (2012-2006), from his birth this year will mark one hundred years straight and with whom we last parted six years ago, is probably our most famous wartime airman. Moreover, not only on the west, but also on the Eastern Front. If everyone just a little insider remembers the name of any of them, then it's probably yes. First of all, he had enough talent to make their experience could translate into literary works, making his name leaked to the general public. And let's add that thanks to the awareness of MS. war flyers for the general public not vanish even in the time of normalization.
After the Nazi occupation was a young officer in active MS. Air Force to those who "do" not give up. After escaping to neighboring Poland sailed to France, graduated from the sky on which his baptism of fire. After the fall of the dramatic circumstances came to Great Britain, where the RAF immediately donned his uniform, which is promptly attended the Battle of Britain. He became one of only 89 Czechoslovak fighters with the status of the participant's key clash, one out of that proverbial "handful" (The Few), which at times resisted Britain's hardest test.
Later he became the first of only three Czechoslovaks, whose crew of British Royal Air Force (RAF) even told his own command of the squadron (No. 122). And he did not award himself, but for all MS. Air Force. After his subsequent shooting down over occupied France managed an incredibly dramatic and adventurous way happily through Franco's Spain to return back to England - only "to save himself for another fight," as he said. A similar piece was done by only two other of his countrymen. Until the end of their "British" action then fought at the head of his old 313th Czechoslovakia. Fighter Wing and became the only MS. officer who commanded the RAF as a British squadron, and Czechoslovakia. Then he volunteered to the Eastern Front until the end of the war commanded the 1st Czechoslovakia. Fighter Aviation Regiment of the USSR, famous especially for his troops bravely fight on all sides of the besieged rebel territory of Slovakia. Although the war he returned from the East, as an essential 'hideaway' for February escape persecution by the communist regime. His person as would be reflected all the queues on which war Czechoslovak airmen had to fight their own battles, who have witnessed their victories and falls.
write about Francis Fajtl but it is not easy. Not only because the 94 years that he imposed a generous fate, to be published novel, but mainly because a large part of their literary experiences could handle himself in several books of his memoirs. So any writer at first threatens to repeat already stated. Although in his memoirs, however, captured a substantial part of his life and especially the fate of war, a number of things, events and their contexts were either left unsaid or only hinted at. Indeed, part of his memoir was published with the normalization, which had its "specifics."
The author of the first part of this publication is lavishly staged historian. Fajtlovým military and airlines take us through life mainly through the yellowed papers, still lying fallow in both Czech and Slovak, French, British, Belgian, German and Russian archives. On his personality and units which served or commanded them, looking from another, or at least rotated perspective. For example, from the perspective of opponents he faced, and where had he and his colleagues rather nebulous concept.
Historical and documentary hearing, even though extensive, however, to render vivid personality of any man is not enough. Therefore, the second is the second part of personal knowledge and previous depicting something. Francis was not a Fajtl staunch Puritans, but hardly anyone let insight into their privacy. The husband and father is his closest zavzpomínají, wife and two daughters. To be clear, "Mr. General" was above all one who loved his family very heavy and nice moments and lived an ordinary life, often with extraordinary experiences, but always honestly, humbly and honestly.