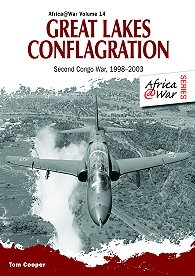 This product was added to our database on Friday 31 January 2014.

Great Lakes Conflagration is the second in two volumes covering military operations in the Democratic Republic of Congo (DRC) at the turn from the 21st century. This volume explores developments in the DRC that led to the outbreak of violence in August 1998, and systematically details the continued build-up and status of the Congolese, Rwandan and Ugandan armies, as well as the forces of Angola, Namibia, Zimbabwe and other African countries that were sucked into the conflict.

Recounted is the Rwandan attempt to topple the government of Laurent Kabila through an operation that saw a redeployment of some of best Rwandan units from Kigali and Goma to the western DRC, resulting in a series of fierce air-land clashes with Zimbabwean and Angolan forces and culminating in the Battle of Kinshasa. Also described is the fighting along what became the 'Eastern Front' in the DRC, as Zimbabwean and allied troops attempted to stop Rwandan, Ugandan and rebel advances out of Kivu Province in the direction of the Congo River through 1998 and 1999.

These early phases of the war, or 'The First African War' as it has come to be known, were characterized by surprising outflanking and infiltration manoeuvres; foreign mercenaries; Zimbabwean Hawk and Lynx light strikers flying intensive combat operations from N'Djili airport, half of which was occupied by Rwandans, Ugandans and Congolese rebels; interdiction strikes guided by special forces deployed deep behind enemy lines; operations of helicopter gunships and transport aircraft under intense ground attack in support of troops cut off by advancing opponents; use of transport aircraft as makeshift bombers in bad weather and by night and clashes of armoured forces and many other elements of 'high-technology' warfare.

This book is illustrated with an extensive selection of exclusive photography, colour profiles and markings, making it of special interest to enthusiasts and professionals alike.


AFRICA@WAR SERIES
At any given time, there are at least half a dozen conflicts taking place in Africa, from civil strife and brutal insurgencies to full-blown conventional wars. Yet, apart from the grand campaigns and battles of colonial yesteryear—Omdurman, Isandlwana, Spioenkop et al—little is known outside the Dark Continent of the plethora of brushfire wars that occur with monotonous regularity. Following the Second World War, with the colonial powers—Britain in particular—looking to divest themselves of their burdensome empires, the 'winds of change', fuelled by the Cold War, swept through every nook and cranny of the continent. From Algeria to South Africa, from the Congo to Kenya, the continent literally erupted in conflict. Butchery and barbarism, under the guise of Black Nationalism, became bywords of African insurgencies; the tactics of terror, so espoused by Chairman Mao, one of the principal backers—in competition with Soviet imperialism—of African liberation movements, became standard operating procedure.