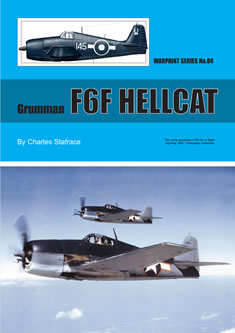 Grumman F6F Hellcat (Hall Park WS-84)
€ 20.14
€ 17.39
Save 13.7%
Reduced shipping charge may be applicable depending on country of destination and contents of shopping cart. Will be shown before checkout.Add to cart

This product was added to our database on Friday 5 August 2011.

Share this product
Also in this series:
WS-84Hall ParkBooks on aviation
Product description

Even before Pearl Harbor the US Navy realised that it would be hard for its existing fighters, the F2A Buffalo and F4F Wildcat, to deal with Japan's shipboard fighters, especially the A6M Zero. The situation was such that in June 1941 the US Navy placed orders with Grumman's 'Iron Works' for the F6F Hellcat before the first prototype had even flown. It was the right decision for Grumman's new fighter, although much larger and heavier than the Zero, proved to be the latter's nemesis, so that the American fighter's better fire-power, sturdiness, range and speed more than matched the Zero's agility. It's entry into service was also timely, for the much- awaited F4U Corsair suffered from a flawed carrier deck capability, so that the Hellcat remained the main carrier fighter of the US Navy throughout the rest of the Second World War and established air superiority in the Pacific. Indeed, in barely two years of war it destroyed no less than 5,271 enemy aircraft of the 6,477 claimed by the US fighters, attaining a fantastic kill-to-loss ratio of 19.1:1, and fully deserving the nickname of 'Ace-Maker'. It certainly was the most important Allied shipboard fighter of that world conflict. The Hellcat was used also by the Royal Navy's Fleet Air Arm, during the war, while in the postwar period it saw service with the French Aéronavale, which used them in Indochina, as well as with the Uruguayan Navy, the latter flying them until 1961.