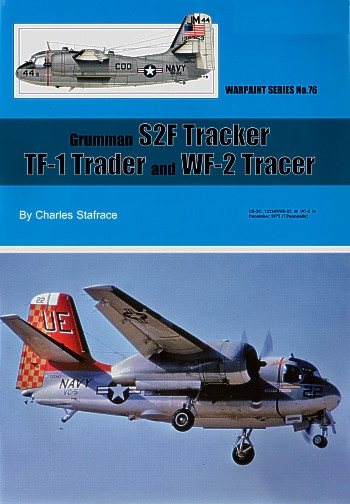 Grumman S2F Tracker, TF1 Trader and WF-2 Tracer (Hall Park WS-76)
€ 16.47
NL incl. VAT € 17.95
Reduced shipping charge may be applicable depending on country of destination and contents of shopping cart. Will be shown before checkout.Add to cart

This product was added to our database on Monday 12 April 2010.

Share this product
Also in this series:
WS-76Hall ParkBooks on aviation
Product description

The emergence of the aircraft carrier after the Second World War as the key fleet unit dictated different methods on how to conduct naval air warfare. The experience gained by the US Navy in the Pacific designated the way how future carrier task forces were to be supported by dedicated anti-submarine warfare aircraft, airborne early warning platforms and effective shore-to-ship aerial communication facilities. Grumman, a traditional supplier of naval aircraft, was quick to respond to this fresh way of thinking, and developed a successful line of three shipboard, twin-engined, unpretentious-looking aircraft. In 1952 the prototype of the S2F Tracker made its first flight for the US Navy, solving once and for all the long-standing problem of uniting in one airframe the 'hunter' and 'killer' pair of anti-submarine aircraft. The Tracker went on to become the leading anti-submarine aircraft of its time in the world, serving with numerous air forces and navies well into the 1980s, and indeed some are known to be still in service in Taiwan's navy. From it was developed in 1955 the TF-1 Trader, with a chubbier fuselage to enable it carry out its role of Carrier On-board Delivery, thus facilitating and standardising ship-to-shore and ship-to-ship communications in the US Navy. The awareness of airborne early warning in the late 1950s gave birth to another variation on the same theme, so that close on the Trader's heels came the WF-2 Tracer, using the deeper fuselage to contain its sophisticated equipment. Its most distinguishing feature, which at the time presented a strange sight, was the large oval 'saucer' fixed atop its fuselage to contain the enormous radar antenna, a rather common and accepted solution these days. Among them these three Grumman products gave the US Navy the lead over all other navies in terms of flexibility, fleet protection and battle management which today's modern navies have taken for granted. The effectiveness of these three aircraft, and later by their successors, was proved time and again during the various conflicts in which the United States has been involved since the Vietnam War.