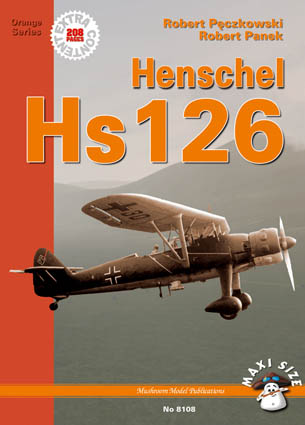 This product was added to our database on Tuesday 14 October 2008.

The Henschel Hs126 was the Luftwaffe equivalent of the Lysander, a classic high-wing STOL army cooperation aircraft. Like the Lysander, it proved too vulnerable in wartime operations, and was quickly relegated to training and glider tug roles. It had a renaissance later in the war as a night attack bomber on the Eastern Front. The Hs126 also saw service in Spain, Latvia, Soviet Union and Greece.
This book describes the development and operations of the Hs126, and is illustrated with many photos and colour profiles, plus scale plans. Over 350 previously unpublished wartime photos are included.


This book, written by a highly respected historian and best-selling author, tells the story of these elegant aircraft in all their versions. Profusely illustrated with historical photos and close-up detail shots of the few surviving airframes, plus scale plans and drawings from the manuals, it chronicles the design, development and service of the Hart family in its many guises. From the vibrant colours of the pre-war RAF and FAA through to the drab camouflage of wartime operations, and the many overseas users from Afghanistan to Eire, the varied markings applied to these aircraft are fully illustrated in colour profiles.

This is the first in a new "Orange Maxi" series from MMP, with more pages than our usual books to cover aircraft types whose stories cannot be squeezed into our standard format!

This is essential reading for all those interested in military aviation and beautiful aircraft. It is an invaluable reference for aero-modellers and aviation historians.