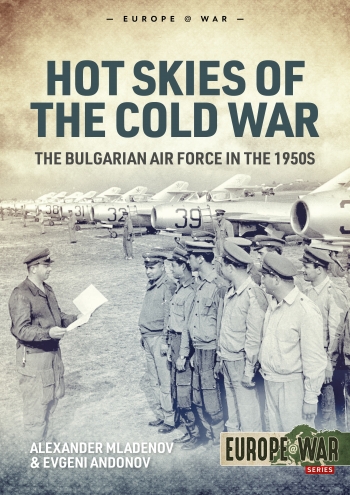 After the end of the Second World War, Bulgaria fell in total dependency upon the Soviet Union as a direct result of the 1944 Yalta agreement on the 'spheres of influence' division of Europe. The Bulgarian Air Force was radically reformed in the Soviet style and rapidly re-equipped with huge numbers of front-line aircraft. The strengthening of the Bulgarian air arm became a high priority as the Cold War in the Balkans gathered speed, and small incidents near the southern and western borders of the country began to occur with increasing frequency. The extensive 'Sovietisation' of the Bulgarian air arm led to the eventual change of its official title in late 1949, becoming identical to its Soviet counterpart, the Voennovazdushni Sily (VVS), featuring a structure identical to that of a Soviet front-line air army. In April 1951, the Bulgarian Air Force entered the jet era with the delivery of the first batch of Yak-23 fighters, followed not after long by the MiG-15. The hot period of the Cold War in the early and mid-1950s saw frequent night overflights by US aircraft ferrying CIA teams to be delivered by parachute to Bulgarian territory, and often to Romania and the southern parts of the Soviet Union. This tense situation required a constant high alert state, but the Bulgarian jet fighters and anti-aircraft artillery proved largely unsuccessful in countering the night intrusions. They were more successful, however, in countering the flights of high-altitude balloons with photo reconnaissance equipment launched by the US intelligence in an effort to gather information on the countries behind the Iron Curtain. The only occasion of a foreign aircraft being shot down was El Al Flight 402, a Super Constellation on a regular passenger flight between London to Tel Aviv via Vienna and Istanbul. The ill-fated airliner, known as one of the greatest victims of the Cold War tensions, nervousness and distrust, was attacked by Bulgarian MiG-15 fighters on 27 June 1955 after it erroneously strayed off course into Bulgarian territory, killing all 58 people onboard. The formation of the Soviet Union-dominated Warsaw Pact Treaty Organisation on May 14, 1956 heralded the beginning of a new era in the VVS' development. As one of the most enthusiastic Warsaw Pact members, Bulgaria was readily supplied with huge numbers of combat jets, anti-aircraft artillery, surface-to-air missile systems and early warning radars in an effort to boost up the pact's southern flank defence.