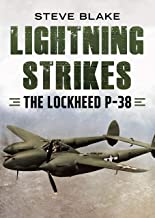 This product was added to our database on Sunday 13 September 2020.

Lightning Strikes: The Lockheed P-38 tells the full story of one of the most successful aircraft of the Second World War. The P-38 – including its F-4 and F-5 photo-reconnaissance models – served with all of the USAAF's overseas combat air forces from early 1942 until VJ-Day.

The book describes the Lightning's design and technical details as it evolved from the XP-38 to its final variant, the P-38L-5. The main focus is on its service in the combat theatres, from the windswept Aleutian Islands in the North Pacific to the steaming jungles of the South Pacific and Southeast Asia, the burning sands of North Africa, and the temperate climes of Europe.

All the units that flew the Lightning are included as are the experiences of many of their pilots and ground crewmen as they fought the Japanese and the European Axis. Also related are the P-38's service with foreign (non-U.S.) air forces, its post-war commercial utilisation as civilian aircraft, and surviving examples in museums around the world.

Lightning Strikes is illustrated with nearly 400 high-resolution photographs and is supplemented by detailed appendices.