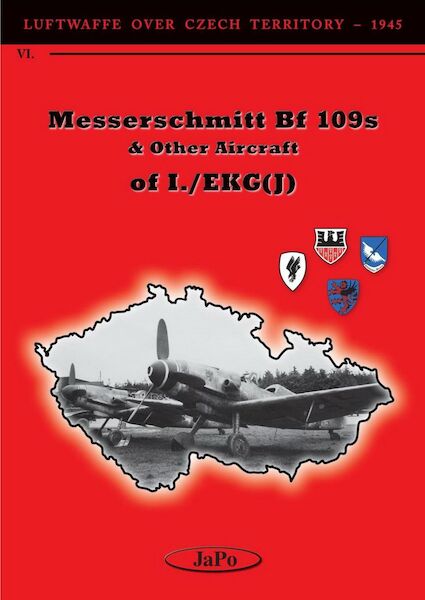 Share this product
Also in this series:
9788090704930Janda & PorubaBooks on aviation
Product description

There has been realized an operation within the Luftwaffe since autumn 1944 to increase number of shortage fighter pilots by retraining of bomber pilots. This transformation and pilot training have been described in our titles "Messerschmitt Me 262s of KG & KG(J) "Messerschmitt Bf 109s of KG(J) 6".,

This study deals with the I./EKG(J) which should ensure to continuously replenish the personell strengh of KG(J) units and to substitute expected losses and which activities were mostly connected with Protectorate Bohemia and Moravia. The title extends number of titles with this theme to the trilogy.
As is usual in the "Luftwaffe over Czech Territory  1945" line the historical description is accompanied by historical documents, tables, b/w and colour photos and description of 38 aircraft from that 28 Messerschmitt Bf 109s, 5 Focke-Wulf Fw 190s and 5 Arado Ar 96Bs.

An example of one of the machines analyzed in the publication. The Bf 109G-6/U4, "Black 29" belonged to the 2./EKG(J) (later 18./EJG 2). The aircraft underwent repair at the Brinker Eisenwerk, Max. H. Müller company in Wunstorf and has been left in Pilsen in May 1945.