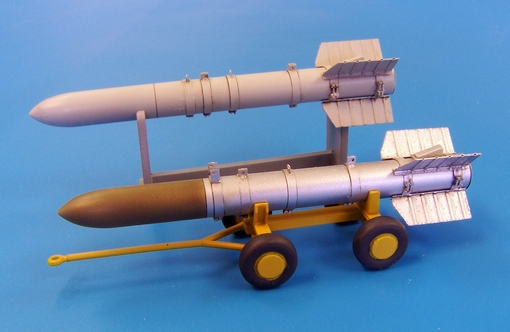 This product was added to our database on Saturday 4 January 2014.

Two complete missiles and one cart


The Tiny Tim was an American air to ground rocket used near the end of the Second World War. One source states it was built in response to a United States Navy requirement for an anti-shipping rocket capable of hitting ships outside of their anti-aircraft range, with a payload capable of sinking heavy shipping. However, according to the China Lake Weapons Digest,the Tiny Tim was
designed by the Caltech-China Lake team as a bunker-buster, Tim was the first large aircraft rocket, and, although it saw only limited service in WWII, it helped form the foundations of many postwar developments in rocketry.

For a warhead, Tiny Tim utilized a 500 lb semi-armor-piercing high explosive bomb. It had a maximum range of 1,500 meters (1,640 yards). They were used by the United States Navy and United States Marine Corps near the end of the war during the battle of Okinawa, and during the Korean War. A problem with the sheer power of the rocket motor causing damage to the firing aircraft was resolved by having the Tiny Tim drop like a bomb, and a lanyard attached to the rocket would snap, causing the rocket to ignite.Common targets included coastal defense guns, bridges, pill boxes, tanks, and shipping.