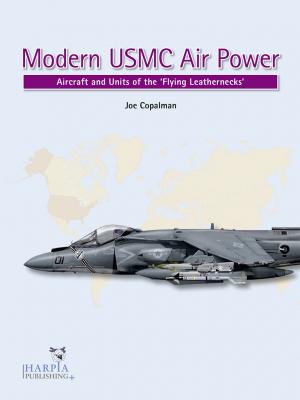 This product was added to our database on Friday 30 October 2020.

As America's expeditionary force-in-readiness, the US Marine Corps operates an eclectic mix of fixed-wing, rotary-wing, tiltrotor and unmanned aircraft to support the marine rifleman on the ground. The first two decades of the 21st century have seen an almost complete transformation of the marine air wings, as Cold War-era legacy aircraft yield to digital-age replacements. In Harpia's first book dedicated to a North American air arm, Joe Copalman explains the significance of each aircraft transition in the Marine Corps over the previous 20 years – community by community – on the Marine Air-Ground Task Force and its ability to conduct amphibious and expeditionary warfare. While some of these transitions, like that of the KC-130T to KC-130J and AH-1W to AH-1Z, have been incremental, evolutionary steps up, others like the tandem-rotor CH-46 Sea Knight to the tiltrotor MV-22 Osprey and the introduction of the F-35 Lightning II to replace all three of the Marine Corps' tactical jets have revolutionised the way the service fights. In addition to introducing newer, vastly more capable and connected aircraft into its air wings, the Marine Corps has also invested heavily in keeping its remaining legacy fleets at the cutting edge of lethality and survivability throughout the final days of each type's service. Utilising a before-and-after approach, Copalman guides the reader through every transition in Modern USMC Air Power, examining what each legacy aircraft brought to the fight, and how the service's newer platforms have improved upon those capabilities, especially when aided by new constructs like precision-guided ordnance and digital interoperability.